Loyalty Shines from Her Love of God, Country, Family

Janet Davis grew up in a loving, patriotic, and devout Catholic family. She was one of nine children. Her father worked as a civilian aviation mechanic for the fighter squadrons at Mitchel Air Force Base, Long Island, New York.

Her and her siblings attended Catholic school, where empathy and charitable giving was a great focus. She knew the value of hard work, loyalty, and responsibility. As a young girl, she’d enjoyed the times when she would fill in for her brother’s newspaper delivery route. She fondly recalls pedaling her bike up and down the streets of the base tossing the papers onto porches and doorways. By the time she was a teenager Davis was working for families on the base babysitting, washing dishes, and cleaning. One week after graduating from high school, she began working in the finance office at Mitchel on military pay records. The building was located behind the Catholic chapel on base. 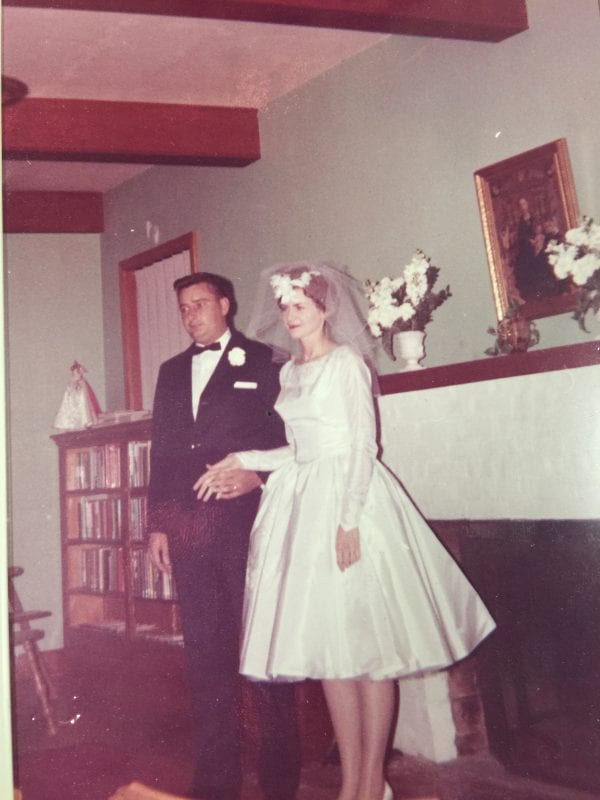 Charles and Janet Davis on the day of their wedding in 1961 pose in front of the fireplace in the Holy Redeemer Parish Rectory in Spencer.

She was proud of her civil service job and met a wealth of great people, one of whom was her husband – Harry “Charles” Davis. He was in the Air Force and had transferred to Mitchel after being stationed in Turkey. He too worked in finance, attended Mass at the Catholic chapel, and joined the same bowling league that she belonged.

“We’d see each other at work, then at the bowling alley, so we started talking and really enjoyed each other,” she said. “One thing led to another and I found myself traveling to Spencer, West Virginia to meet his family.”

She fell in love with the little town that is nestled between the scenic hills of Roane, County. So, in 1961, they chose to get married at Holy Redeemer Catholic Church, in Spencer, and immediately made their home there.

The couple had six children – Kevin, Kimberly, Kyle, Kurt, Keith, and Kane. All served in the military, except Kane, who was drafted by the Pittsburgh Pirates organization right out of high school in 1993 and continued his professional baseball career until he retired in 2010. 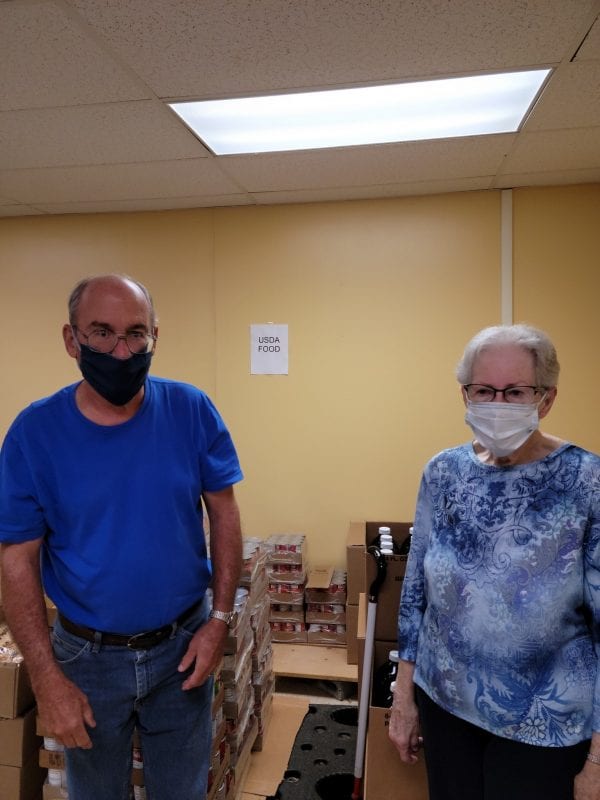 Michael Bernardis and Janet Davis pause for a photo at Helping Hand, Inc.

Through the years the small town in Central West Virginia wasn’t able to escape economic struggles. It seemed more and more people were struggling to put food on their table. Many would seek the help of the churches in town including Holy Redeemer. With the need growing the churches decided to pool their efforts. They formed Roane County Helping Hand, Inc. The agency has moved several times through the years but is currently located at 811 Madison Avenue in Spencer.

“When it began in 1985, I still had kids at home and a husband who worked all hours, and it was important for me to be home for them – to make sure the house was taken care of and everyone was fed,” she said. “But our pastor asked if I would represent Holy Redeemer and volunteer one or two days a week to make sure things would run smoothly at the food pantry.” 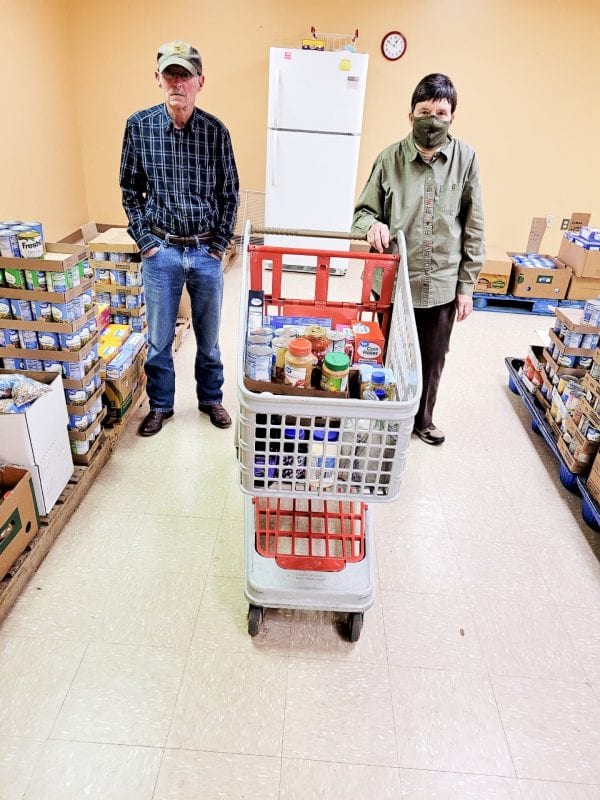 Jim Bissell and Gail Stone fill a good basket for a family.

It wasn’t long after when Davis was then asked to step in as director of Helping hand.

“I did it thinking it would be only for a few months or until I found someone to take over,” she said. Well those months turned into years – 31 to be exact.

With the help of the local churches, community leaders, and businesses, Helping Hand, Inc., became a vital resource for Roane County families right along with Catholic Charities of West Virginia, the American Red Cross, and Salvation Army.

“Our donations came from the area churches,” she said. “Holy Redeemer provided financial donations, and I would petition others for contributions. In each letter I would include my favorite bible verse, ‘Whatever you do for the least of my people, that you do unto me’ (Matthew 25:40).”

Helping Hand, Inc., purchases food each Tuesday from Walmart. In addition, they collect government distributed frozen food and literally tons of food from the Gassaway Food Bank. The volunteers put the baskets together for families and then open their facility on Wednesdays for distribution. 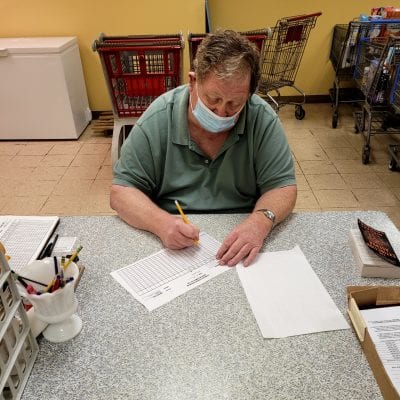 Davis has it down to a science making sure each family receives important staples, including apple sauce, beans, corn, flour, corn meal, canned fruit, cereal, tuna, canned chicken, and tomatoes. During the holidays the group secures a turkey or ham, as well, she said.

After her husband died in 2015, Janet continued as director for another two years, before she approached fellow Holy Redeemer parishioner Michael Bernardis to take over in 2017.

She just turned 86 in September and hasn’t stepped away completely yet. She has been serving as president of the board for the last three years. 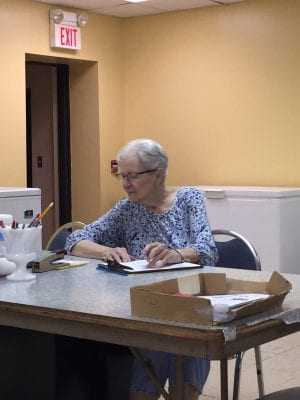 Janet Davis concentrates on paperwork Helping Hand, Inc., in Roane County has to file in order to receive government food for the organization’s family food baskets.

“I wanted to see everything continue and help new members,” Davis said. “I am hopeful to stick with it, God willing, as long as I can, but I have to face reality…. I guess I’m not getting younger.”

“When Mike (Bernardis) came along, I could see he was committed,” she said. “He was loyal, picked up food for us, took on the all the government paperwork, and most of all he enjoyed it.”

Bernardis was raised like Davis in a strong faith-filled family, where serving your community was part of your Catholic identity. 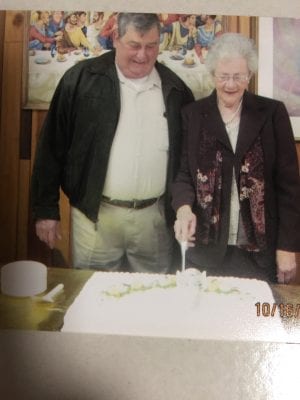 Charles and Janet Davis happily cut the cake on their 50th wedding anniversary in the gathering hall at Holy Redeemer in Spencer.

“I know we are doing what God wants us to do, and what proves it is when people look up and say, ‘God bless you,’ as we hand them the food,” Bernardis said. “That’s enough to keep me going.”

He said Helping Hand now has a team of 20-25 people to help out on a rotating and as needed basis. Holy Redeemer parishioners Jim Bissell, John Stone, and Gail Stone are also key in keeping the organization running.

“You hear it takes an army, but it’s true,” he said. “It takes a mighty army to care for a village.”

Bernardis’ advice to others who want to get involved with their local food pantry or start one in their own parish is to look at Davis and Helping Hand as an example. 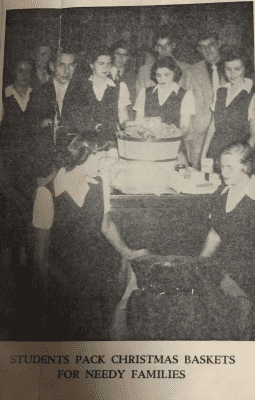 Even as a student at St. Dominic High School, Davis was charity minded.