He can be defined as the Roch of his parish. Yes, R-O-C-H (pronounced Roke or Rock). Deacon Dave Galvin is much like St. Roch – who despite unforeseen challenges served others and helped souls see Christ in him. Although, if you were to make the comparison in his presence he would undoubtedly look towards the sky, laugh, and shake his head at the notion.

Galvin is seemingly tireless. He is up for anything that will make a positive difference in God’s eyes, yet remains a humble soul, quickly turning a conversation away from himself to how Christ is working behind the scenes in all our lives.

During the pandemic, Galvin knew his parish family was struggling not being able to be together. He was too and with the help of a few friends was able to bring God’s message of hope to his parish through Roch-umentaries – inspiring videos to help the faithful to “thrive spiritually in times of crisis.”

Galvin grew up Catholic in a remote town in Pennsylvania. The closest city was Erie about 90 miles away from the Allegheny Plateau region he called home. From an early age he knew the value of job well done and the pride you get from it. That is a trait he learned from his father, Denny, who after a tornado ravaged their hometown of Kane in 1985 literally picked up the pieces of their neighborhood with teenaged Dave Galvin in tow. The Galvin family pitched in to help neighbor after neighbor – odd jobs and roofing mostly. His mother, Perky, taught him how to be frugal – “don’t spend more than you make, save, and help others. Pretty simple stuff,” he said. “I was a kid who got the free lunches and was happy to get a new set of hand-me-down clothes for school. I appreciated what we had.”

Work hard and pray hard, was an unspoken motto. The Galvins belonged to St. Callistus in Kane. That is where Sister Mary David, a Benedictine nun, influenced young David, planting a seed that he should think big spiritually and instilling in him the idea that being successful is not about material things, but making a difference for others in the eyes of God. 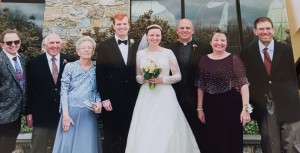 Galvin went on to college and received a master’s degree from John Carroll University. He became a manager of a retail store and married his sweetheart Laura VanKuyk. When the couple had time off, the two would take road trips to visit old churches. Those adventures brought them to the Eastern Panhandle of West Virginia in 1996. Dave and Laura visited St. Peter Chapel in Harpers Ferry. St. Peter’s is the only church and one of the few buildings where the Potomac and Shenandoah rivers meet that was not destroyed in the Civil War.

The Galvins fell in love with not only the rich history surrounding the grand old church perched on top of the hill in the town, but also everything within the structure that was built in 1833 by and for Irish immigrants and then rebuilt in 1896. The glorious high reaching stained glass windows, the ornate Stations of the Cross, and especially the crucifix – made to match the wounds of Christ on the Shroud of Turin.

“The crucifix is so moving and memorable,” Galvin said. “It drew us in.”

Indeed it did. He was working for Sherwin-Williams at the time. Call it coincidence or fate, but just a few months after their West Virginia trip a position opened in the company at a store that would take the couple back the valley they treasured. So, the couple picked up their life in Pennsylvania and moved to Jefferson County not knowing a soul, but certain their faith would sustain them. It proved to be a decision that led to many blessings. The couple frequented St. Peter and became involved with St. James the Greater Parish in Charles Town. They welcomed three children – two daughters, Hannah and Claire, and a son, fittingly named, Peter. 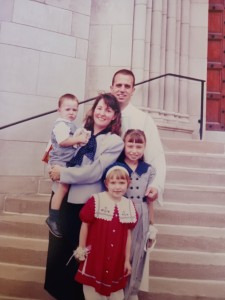 The Galvin family on the steps of the Cathedral of St. Joseph at Deacon Dave Galvin’s deaconate ordination with wife Laura, holding Peter, and daughter’s Hannah (blue dress) and Claire (red dress).

Work was going well for Galvin, and opportunities for advancement knocked on his door. While a huge increase in pay and the opportunity for their children to attend the Catholic schools in Cleveland was enticing, after the couple reflected on how their lives would change, moving up the corporate ladder was not for them. Instead Galvin entered the diaconate program for the Diocese of Wheeling-Charleston.

“The program wasn’t easy, but I had Sr. Mary David to kick my butt and save my vocation when I wanted to drop out halfway through,” he said with a huge grin.

In 2004, Galvin was ordained a deacon in the diocese and for his parish, St. James. Since that day he has taken his vows to heart – “to serve like Jesus Christ and work tirelessly to get people to heaven,” he said. “I want to invite everyone to come into the Church – to come home to God’s Church.”

Whether it is producing his evangelizing Roch-umentary videos, mapping a parish kayaking trip, delivering the sweets to Donuts with Deacon events, or heading to Webster Springs with a men’s or youth group to repair and build houses for our less fortunate brothers and sisters, Deacon Dave Galvin is doing just what St. Roch would do be a living example of the teachings of Jesus Christ.

“I wake up every day with a prayer of thanksgiving that I am here,” he said, rattling off a long list of saints, like St. Zita, St. Vincent, St. Stephen, St. Lawrence, and others, who inspire him to stay focused and not let others down – not let God down. “I work hard to stay in God’s grace and work for Christ.”