“I kept running away from the idea of becoming Catholic, but something kept pulling me back,” Swearingen said.
The road to his conversion story has had its twists, turns, and even drop offs. However, he said when he stopped ignoring the call and fully committed to God through the Catholic religion, especially its rich traditions, his life gained the balance he and his family needed. 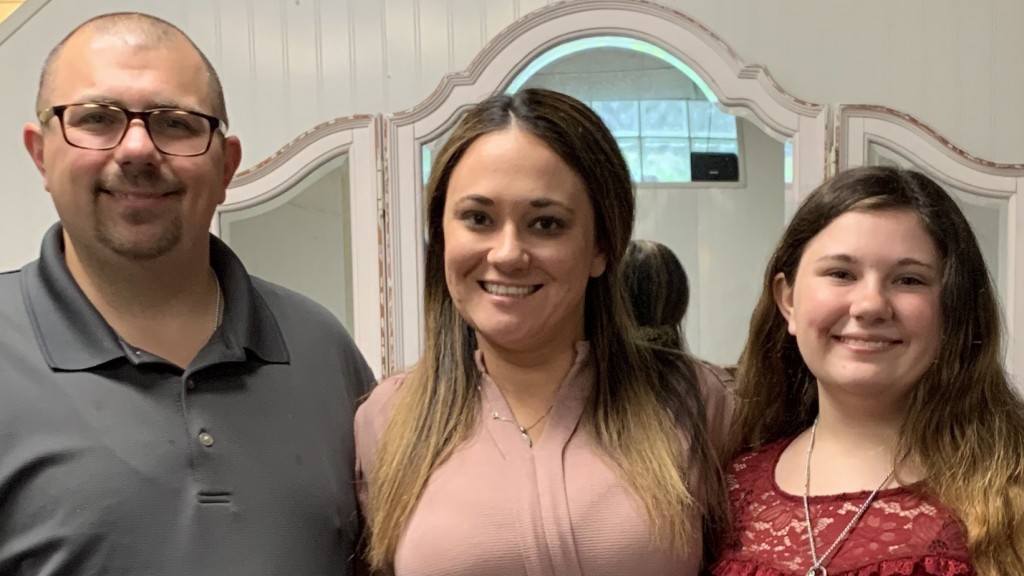 Donald, Jessica, and Cailee Swearingen pause for a photo before Mass at St. Joseph the Worker, Weirton.

“I grew up protestant. We would go to church on Easter and Christmas, but never with any consistency,” he said. “I didn’t want to go to church as a teen. I struggled with any sort of faith life in college. For years I didn’t know what I believed. I became depressed. I gave into my downfall, which was food. There was a time when I even questioned if I was atheist.”
He said as an adult, husband, and father, he was drawn into wanting to learn more about Catholicism, but ignored those feelings, “because it would be adding a lot more accountability and obligations” he didn’t want to accept.
“Now I refer to that time as my spiritual darkness,” he said. “I was challenged with anger and depression issues, and I began putting on a lot of weight.”
He and Jessica were living in Morgantown at the time.
“We entered a Baptist based church and things moved along for us fairly well. We enjoyed the preacher and had a feel-good presence there, but it wasn’t stable. It wasn’t enough.”
The church eventually crumbled. They tried another congregation but left feeling empty. So, the couple suspended their church life. They left Morgantown to return to the Weirton area they were originally from to be closer to their extended family, but church remained out of the picture.
Life continued to be “busy” and their spiritual quest vanished. That was until Donald said his family too an unexpected hit.
“It’s awful to say, but it took something horrific to wake me up and make us rethink everything.”
That tragedy was the unexpected death of his wife Jessica’s father, a pillar in their family.
“It was a spark that lit a fire in me,” Donald said. “I had so many questions, but nowhere to turn. When I die, am I going to heaven? Am I honestly even prepared? I knew I needed to step up and get out of this darkness I was in, stop beating myself up, and stop doing nothing about my spiritual growth – my family’s spiritual growth. I found myself being pulled again to the Catholic church. I began attending Masses on a regular basis, and that is when I felt like I truly belonged.
“I was thinking more clearly. I actually dropped 100 pounds. I took part in a 54-day Rosary Novena. I learned about liturgy of the hours and began praying that in the morning and evening. I felt a huge difference.” 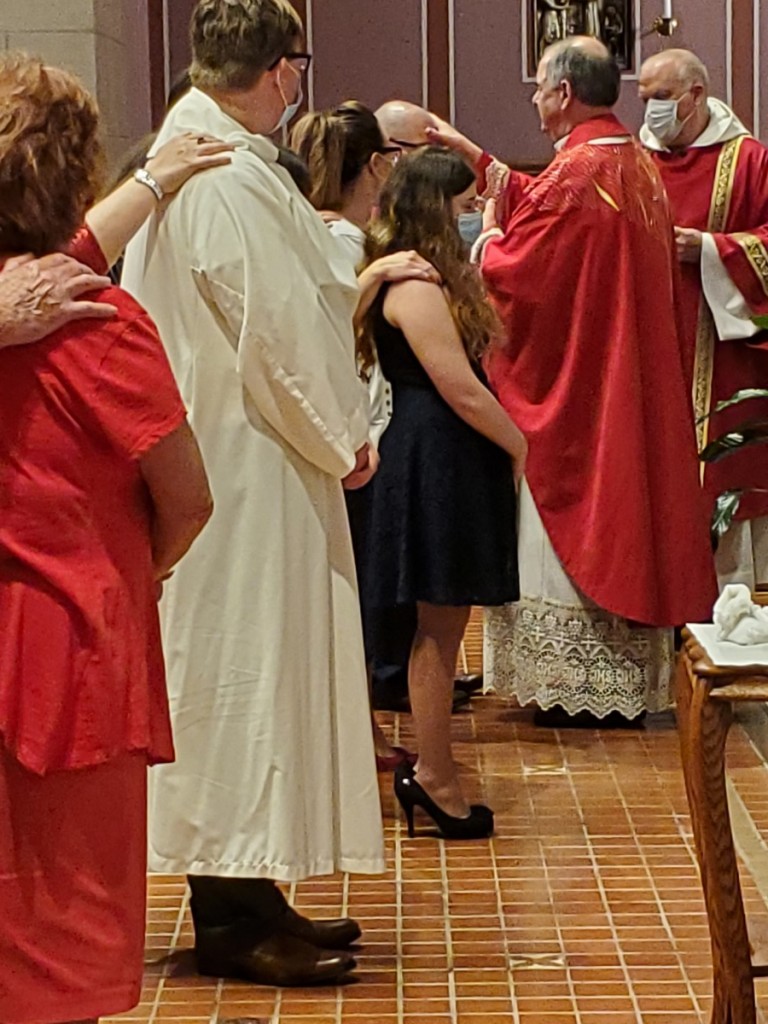 Pentecost Sunday had special meaning for the Swearingens, shown here with Cailee at the foot of the sanctuary with, Jessica to her left, and Donald, receiving the blessing as they family officially entered the Catholic Church.

Jessica noticed his dramatic changes and the peace that came over him. She knew she too needed “that something more.
“As a child, my family did belong and was active in a traditional Free Methodist Church,” she said. “As I got older, I didn’t make it my priority to go anymore. It wasn’t until after my father passed away that I was overcome with the feeling of needing Christian traditions back. I missed it. I needed it.
“I needed to join (Donald) and take this big step in joining the Church together. We needed structure as a family. It made sense.”
Soon their teenage daughter Cailee approached them, wanting to attend RCIA too.
“I actually feel more freedom in the Catholic church,” Cailee Swearingen said. “I don’t feel like I’m being judged. I feel like they’re accepting me for who I am. There is more room for people to think and ask questions not just to be preached to. I like being able to think things over and being challenged to be a better person.”
The Swearingens have three younger children Eve, 13, Donnie 8, and Bella, 7.
“I can truly say that this (conversion) is helping us with our daily life,” Donald Swearingen said. “We are doing more as a family. Our quality time is just that – quality.”
Jessica Swearingen said the RCIA classes and celebration of Mass have filled her desire for more stability and spiritual guidance, as well as the need for proud traditions.
“My favorite part of all of this has been the change I see in how we do things,” she said. “There is such a joy now in our family, especially with our little ones. We have more purpose and do things more intentionally. We enjoy Mass together and say the rosary. I love that. Our kids are saying it and after are proud that they did. They look at me and say, ‘Mommy did you hear me? Mommy I was able to say the whole thing.”
The family are now members of St. Joseph Parish in Weirton.
“Becoming Catholic now was God’s timing,” Donald said. “The Catholic church isn’t going anywhere. It is the original church. It is a worldly institution, not a trendy congregation. If a priest or bishop does something bad, they are dismissed, but the church goes on. There is structure. There is rich tradition. There is so much history. It is the first Church.”
The COVID-19, stay at home orders, and the suspension of public Mass tested the Swearingens’ and their desire to enter the church.
“It was hard on our spiritual life to be away from Mass,” Swearingen said. “When you don’t go to church every Sunday, it makes it a little easier to get distracted with everyday life… and neglect personal devotion to God. We proved we could be shaken but remain in faith.”
During the stay at home order the family enjoyed Mass livestreamed from the Cathedral of St. Joseph, as well as on EWTN. Their final RCIA classes were completed virtually.
The family was elated when they were told they would be entering the Church formally on Pentecost – the birthday of the Church.
“It was a very unique and memorable entrance into the Church,” he said. “Any ceremony at the cathedral is going to be an amazing one, at least for me. The cathedral is strikingly beautiful, and the style of music really makes the atmosphere holy and reverent.”
The Mass on Pentecost was emotional for the family. For Donald it was a long time coming, something he had longed for years and finally accepted as the greatest gift. For Jessica, when she received communion, she felt the loving presence of her late father. Cailee too was overcome with emotion as she received the Sacred Body of Christ, as thoughts of her grandfather rushed over her.
“It’s been a long time coming,” Donald Swearingen said. “Despite all that has happened God remains my rock and salvation (Psalm 62:7).”