Described as The Rock of His Parish, Father Tom Gallagher Honored as Priest of the Year 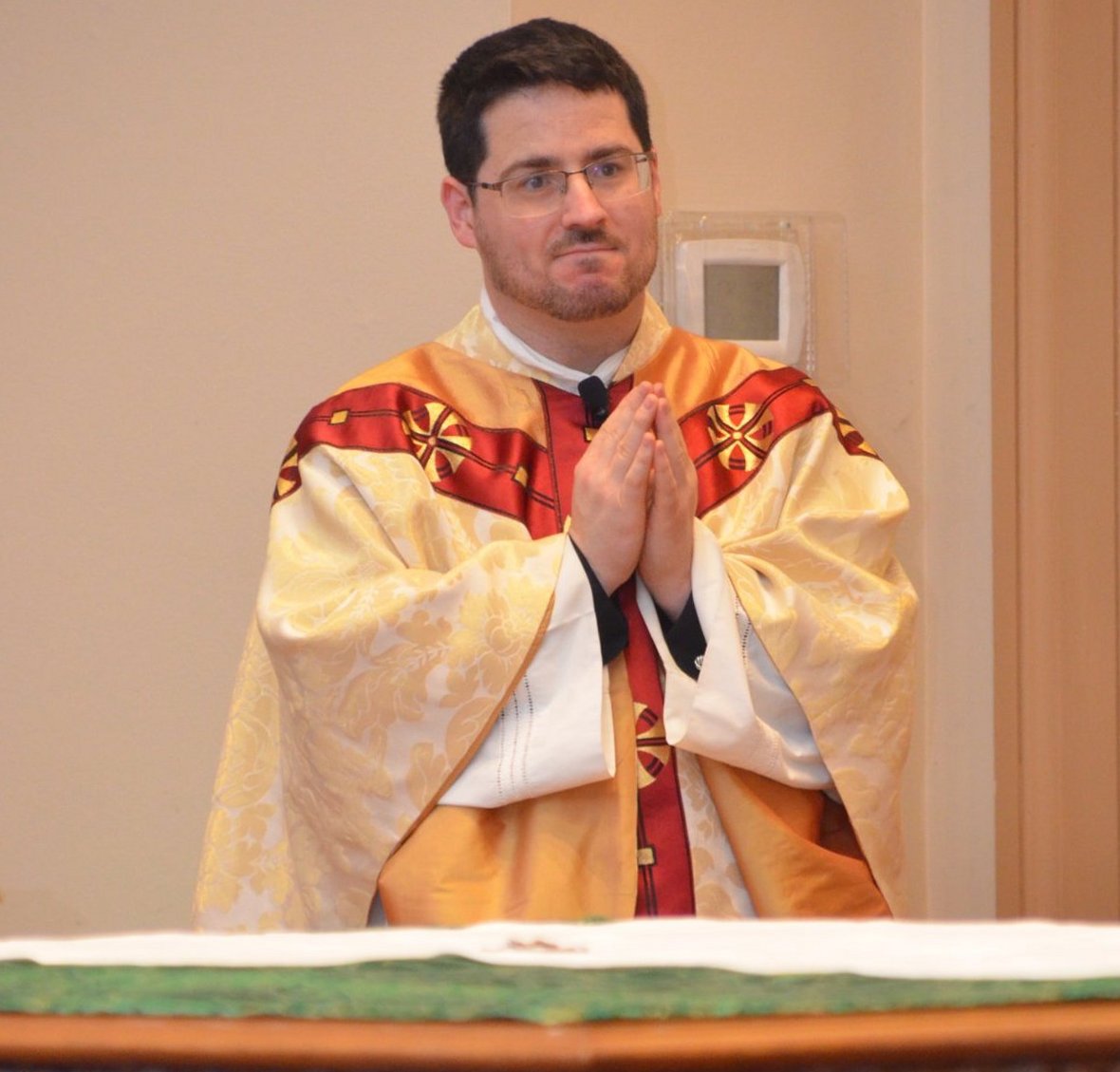 When his second-grade teacher at Sacred Heart Grade School in Charleston gave the class a homework assignment to write about what they wanted to be when they grew up, he wrote he was going to be a priest. Little Tommy Gallagher pictured himself in the shoes of his pastor, Monsignor Edward Sadie. Fast forward to the teenage and college years and that picture may have blurred, but it never completely faded. Thankfully for the Diocese of Wheeling-Charleston, the sweet daydream of that dark-haired youngster, whose eyes smile right along with his tight-lipped grin, took the Kanawha County boy all the way to Rome, the heart of the Church in the Eternal City, to learn the ministry of St. Peter – the rock of the Church.

The faithful of St. Joseph Parish and Knights of Columbus Council 1169 in Martinsburg describe Fr. Tom Gallagher as the rock of their faith community. Father Gallagher was named Priest of the Year by the WV Knights of Columbus for being an outstanding example of what a holy priest should be.

He grew up in Cross Lanes, West Virginia, a suburban area of Charleston, attended Sacred Heart Grade School, and graduated in 2002 from Charleston Catholic High School.

Father Gallagher is the third of seven children of Thomas and Suzette Gallagher. His parents moved to West Virginia from St. Louis for his father’s job when he was an infant. His father was a coal company lawyer. 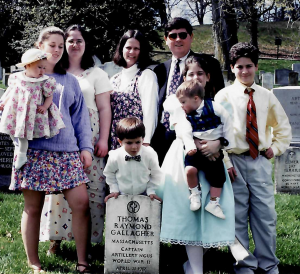 Family photo: The Gallagher family visiting the grave of their grandfather Thomas Raymond Gallagher at Arlington National Cemetery. Left to right: Eileen (being held) Meghan, Erin, Brendan, Mom (Suzette), James (being held), Kathleen, Dad (Tom), and young Fr. Tom Gallagher, who like his father was also named after his grandfather.

Looking at family photos, it’s evident he looks like his late father with the dark wavy hair, brown eyes, and same smile. He also mirrors his father’s high set of ideals and drive to remain focused and not over complicate things.

While both of his parents treasured their faith, Fr. Tom’s spirit truly reflects his mother, who has always been a role model for the attention she gives to others and her reverence to her faith. 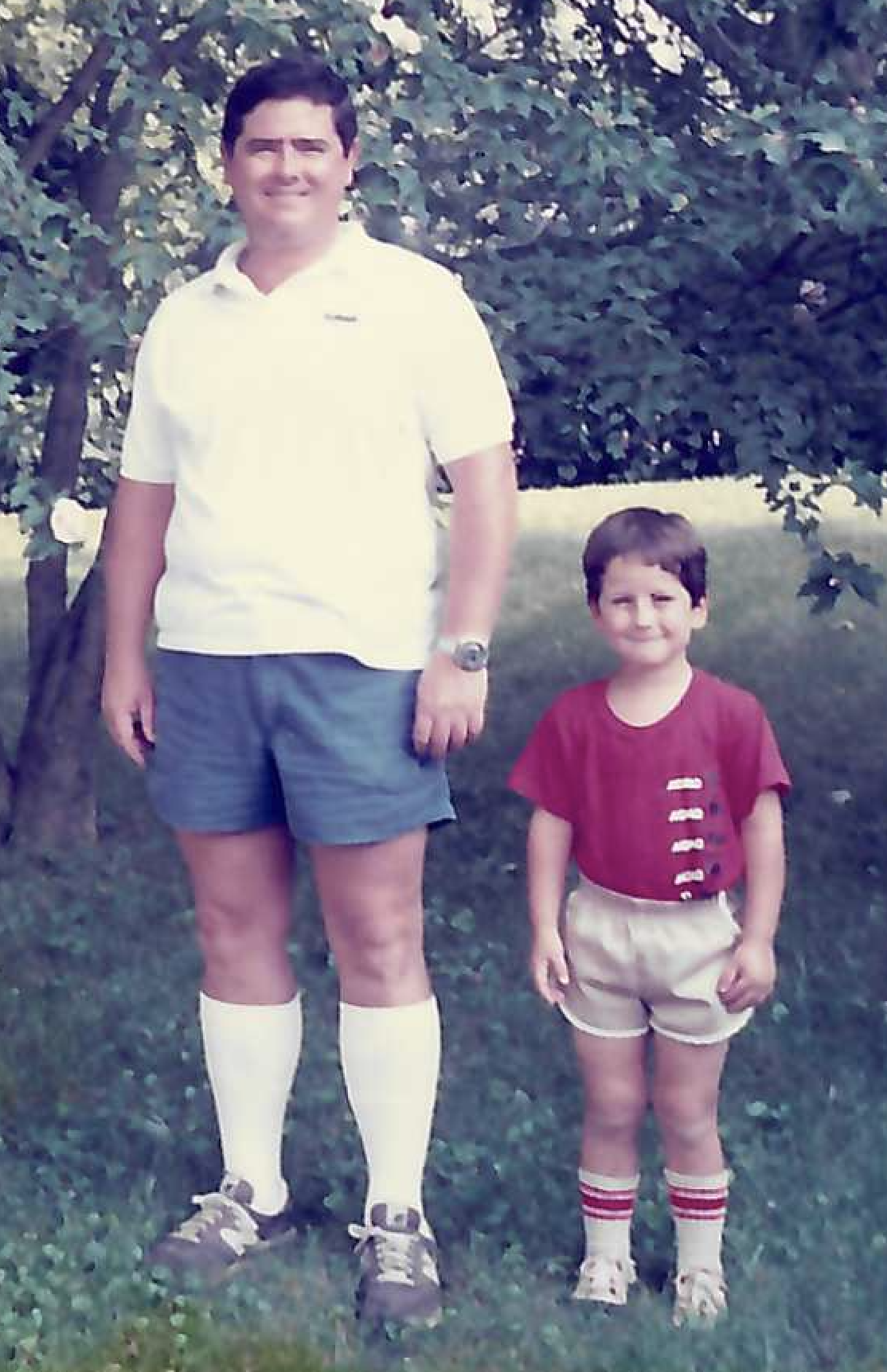 As a child it was his mother that would make the Gallagher children sit for the “dreaded family rosary,” he said with wide eyes and a grin, recalling his childhood. Then changing his face to sheer fondness added, “she has always encouraged me, encouraged us in our faith, but specifically me toward the priesthood,” maybe call it a mother’s intuition.

Whether it was attending Mass, a funeral at the family’s parish the Basilica of the Co-Cathedral of the Sacred Heart, or the Santo Nino Novena and celebrations, Suzette Gallagher’s devotion to the Church, the faithful, and the community has inspired the young priest.

“As an adult I look back with such fondness of what she’s done for me and my faith formation,” he said. “She would take us to events and Masses that were beyond the Sunday obligation. At the time, I reacted like a typical kid – so, yes, I can totally identify with the kids I’m around now with that same look of dread,” he said and added, “as I got older, I was like, ‘Oh! I do see the lessons she taught me.’ She wouldn’t just go to church she would stay after and talk to people, because she cared. She didn’t just attend a funeral or event; she would linger and give her love and attention to others. She still does this.”

After high school Fr. Tom went to Wheeling Jesuit University and graduated with a degree in Philosophy.

“I so remember going back and forth with this idea of being a priest,” he said. “I struggled. I wanted to be 100-percent all in with no doubts, but then I realized I need to try this out. It’s okay if I don’t know. I remember vividly I was in a metro station in New Carollton (Maryland, just outside Washington, D.C.) I was sick and tired of going back and forth in my head with my feelings. I did everything you should do to discern – prayer, reflection, etc. – then it hit me that this doesn’t need to be seamless or some big boom of a feeling. I said, ‘Fine!’” 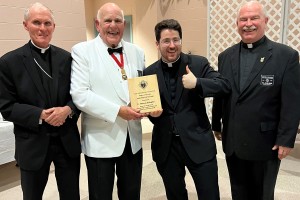 That was the end of his senior year of college. He completed the application to be a diocesan priest – an application he had started and stopped several times in the years prior. Once accepted he was sent to St. Vincent Seminary in Latrobe for one year before going to the Pontifical North American College in Rome for four years.

“I saw many people come and go those first years in seminary, but that’s okay,” he said. “I didn’t look at them as failures, but as being strong enough to be immersed in their discernment. I was happy to be a part of that true fraternity. I was part of a group that encouraged each other to be simply and profoundly good priests.” 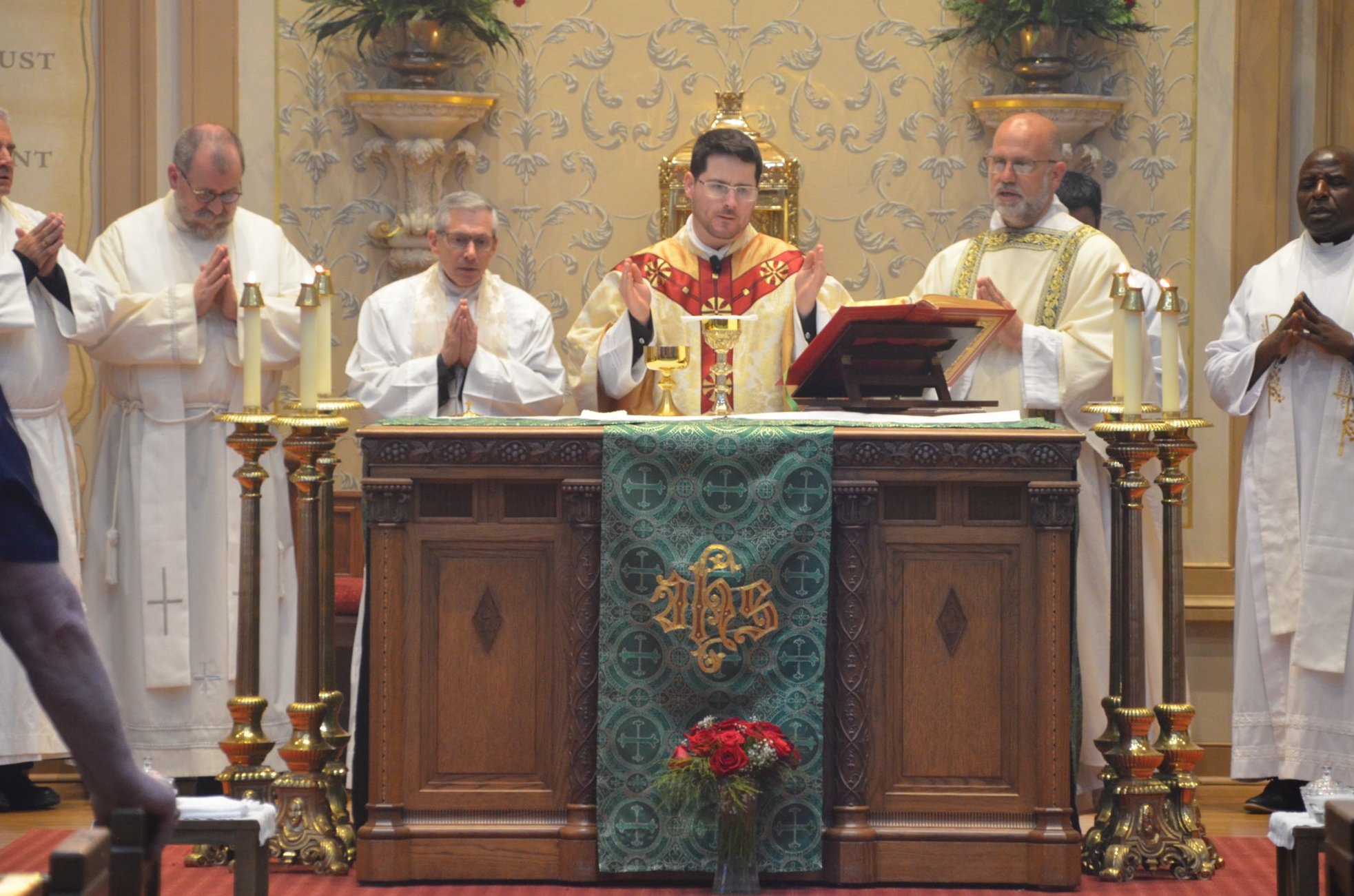 Photos from the 10th Anniversary Mass are by Deacon Luis Pagano of St. Joseph Parish in Martinsburg.

He is credited for bringing Catholic identity back into the activities of the parish and Knights of Columbus. Having a large number of Spanish speaking parishioners and members of the Martinsburg area, Fr. Gallagher learned Spanish and has expanded the Hispanic ministry of St. Joseph. In fact, part of the celebration for his 10th Ordination Anniversary Mass was spoken in Spanish.

Father Gallagher’s picture of a strong and growing parish community is clear. It is one that is confident in their Catholic identity, formation, and actions.

“I want to live the faith and I want the same for my parish,” he said. “I am by no means perfect, but I do know that I rely on faith – our faith. It’s what leads us to charity and to do good works.

“We have to encourage each other in faith so we can have a devotional life,” he said. “Attending the Mass and the Eucharist the source and summit of our faith is paramount, and in addition we need to have the wisdom to know it is our actions that bring us to the fullness of faith.”