“There’s an old saying, ‘If you want to make God laugh, tell him your plans,’” Jason Miller said. “That’s pretty much what’s happened to me, as God said back, ‘You know that’s not your plan.’”

Miller has lived in Weirton all his life. He is the eldest of Harold and Christine Miller’s three children. As a child he attended St. Joseph the Worker Parish. He graduated from Madonna High School and soon after went to work in the steel industry. In fact, Miller owned his own steel company, but when the industry hit one too many roadblocks, he ended up stepping away and heading back to the classroom. 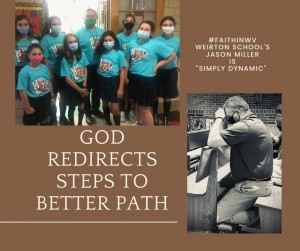 My plan then was to get my undergraduate in history, then a master’s degree so I could be a college professor,” he said. “Pretty clear and simple.”

Well, he did get his undergraduate from Franciscan University, but that’s when his plans started to change course. 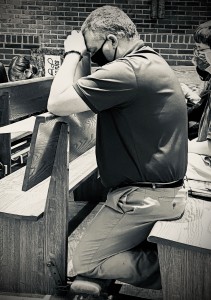 Miller pausing for prayer before Mass

“I was sitting down one day watching Mother Angelica on EWTN, she was going on and on about Holy Apostles College in Connecticut,” he said. “I became so interested. I called the school, left a message, and they called me back. Before you know it, I had built a relationship with the school and became a student there . I thoroughly enjoyed every minute of it. I earned my master’s in theology.”

After marrying his wife Lynn, the couple became members of St. Paul Parish. They are the proud parents of three daughters, Hannah, a senior at WVU; Deaven, a sophomore at Madonna High School; and Alexis, a fifth grader at St. Paul School.

He is the religious education coordinator for St. Paul School and teaches middle school religion classes. Miller is also one of 28 men in the 2020-2024 permanent diaconate class for the Diocese of Wheeling-Charleston. Once completed he will assist the bishop and priests for ministries of charity and liturgical celebrations – distributing Holy Communion at Mass, baptizing, teach, counsel, witnessing marriages, presiding funeral rites, proclaiming and preaching the Gospel.

“I am so ready,” he said. “I thought about it more than 10 years ago, before the last class began, but for no good reason the timing wasn’t right. I’m so happy to be accepted into this class.”

Taking on the role of teacher and student at the same time is a win-win for St. Paul’s.

“Jason Miller embodies faith in West Virginia,” principal Michele Martin said. “(Since he has been in the diaconate program) he does our school homilies. We love that . He can make them so personal and relatable to all age levels.”

He is especially a great role model for the school’s pre-teens and their faith journey, Martin said. “The students enjoy his class and his sense of humor. He’s one of a kind.” 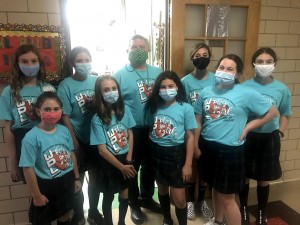 His effectiveness is not only talked about admirably among students, parents, and parishioners, but it’s also documented.

Miller has increased the school’s national religion education assessment (ACRE) scores from the 65th percentile to the 80th percentile – which is well above national averages.

St. Paul School Advancement Director Kim Edmiston has a wealth of glowing words to describe Miller – approachable, knowledgeable, understanding, down to earth, relatable, funny, engaging, comforting, and on and on. To sum it up she said, “He is so loved and such a blessing to the school and parish.”

She said Miller has a clear vision for his students, the parish, and his own family – to bring them closer to God.

Miller is legally blind. At age six he was diagnosed with retinitis pigmentosa, a genetic disorder that gradually worsens vision, specifically at night and depth perception, but can result in complete loss of sight. He is now blind in one eye, and the other is limited. He gets around with

the help of his cane and an endless army of students who eagerly volunteer to lead him by the arm. 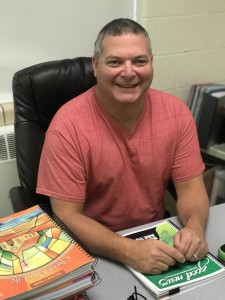 For Miller though it’s not a disability, it’s an added ability to be a better listener, and an opportunity to emphasize real life teaching moments.

“We all have our challenges, especially kids today,” he said.

But what are we doing if we don’t learn from them, and not be too proud to lean on others to help us, he questioned.

“We talk in my class,” he said. “We talk about their hang ups, their problems, their opinions, and they are all valued. I clarify to them that we don’t have one-sided arguments, or debates; but conversations.

“I’m not here to pound on desks and say, ‘You must believe, and if you don’t, you’re wrong!’ We talk, we share, and teach. I present our faith, our catholic beliefs, our Catholic doctrine, and then talk about why we believe all of that. The questions these students come up with are challenging.”

He said that’s actually what makes him stronger in faith and better person.

His colleagues say the word “can’t” is not in Miller’s vocabulary.

He said trying to make a difference in the classroom or in his parish starts within the heart of the difference maker.

“I try to take a moment every morning or every evening to thank God and reflect on the day ahead or the day I’ve had,” Miller said. “I turn that into time of prayer, and even when I may not have the words of my own, I can say the rosary.”

While he isn’t teaching advanced history courses at a university or having to stay on top of steel production and sales, Miller is exactly, where God planned for him to be.

“He’s simply dynamic,” Edmiston said. “He can turn a day-to-day interaction into little snippets about our faith. That’s who he is. He will bring people back to the faith and our younger generation back to church. I’m sure that is God’s plan. It’s easy to see.”