Walking into St. Francis de Sales Catholic Church in Beckley your eyes are immediately drawn to parish’s recent renovations – the gorgeous stone archways, the ornate woodwork, the intricate artwork behind the crucifix, and the restored quotation from John’s gospel about “life everlasting” surrounding the tabernacle.
However, it is the reverent voice and gentle soul of Tony Tipane that will leave an impression on you that will never fade.
This humble man, who sits in a pew that’s in the back of the church near the ninth Station of the Cross, leads the Angelus and the Rosary, before daily Mass. He lovingly announces the opening and closing hymns, beginning them a cappella; and kneels in profound adoration during the Eucharistic prayer.
“ 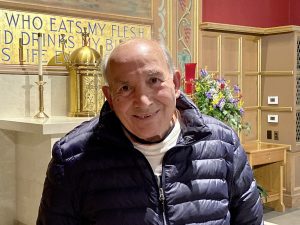 Mr. Tony is always here and always smiling,” said Thomas Spencer, a seventh grader and altar server at de Sales.
Spencer’s classmate and fellow altar server Joey Beatty interjected with wide eyes, “I don’t ever remember a Mass he wasn’t here.”
St. Francis de Sales Deacon Harry Evans said he learns how to be a better person from Tipane.
“In life I’ve learned there are two things for sure,” Evans said. “One, the sun will come up in the morning; and two, Tony will be at Mass.”
Evans who has been a parishioner at the Beckley parish said Tipane is, “the most conscientious and willing parishioner I have ever known. No job is too small or great for him – even at his age.”
Tipane, who is 86, was born and raised in Beckley, West Virginia by his stanch Catholic parents Agatino and Josephine Tipane. He was the youngest of seven children – five girls and two boys.
The boys were altar servers, which made their mother very proud.
Looking up and smiling wide he said, if his mother had it her way, he and his siblings “would all be priests and nuns.” His mother did get to see one of her daughter’s, her namesake, Josephine, take her vows to be a religious sister for a congregation in Kentucky. 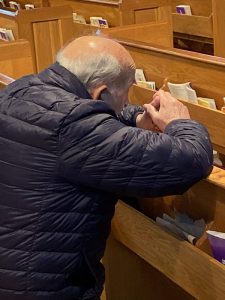 Tony proudly served in the United States Army. He never married or had children. He worked many years for the Social Security Administration and then in private industry until he retired.
St. Francis de Sales Pastor Paul Wharton said when you read the famous quote from St. Augustine, “God loves each one of us as if there were only one of us,” he thinks of Tipane’s unshakable devotion to Christ.
Wharton said, as a priest he is blessed to get to know many dedicated Catholics, “but Tony stands out, because of deep and genuine love of his faith.
“Tony is somewhere between a great saint and an interesting character,” he said.
Young and old everyone at St. Francis agrees wholeheartedly that Tipane is saintly.
“He gives of his whole self to the parish and school,” Debra Lanna, advancement director for the parish school said. “He is as devout as St. Francis de Sales himself.”
Like the gentleman saint, Tipane knows prayer and humility is a testament of ones love for God.
Words to live by, according to Tipane, “Put God first.” 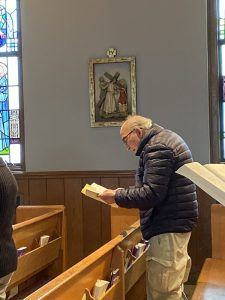 Three simple words, but for Tipane it is truly his lifestyle.
“Trust in God and believe in God,” he said. “He doesn’t always answer our prayers like we want, but he always hears us and answers them in His own way.”
St. Francis de Sales Principal Mary Grace Peck said Tony is the pillar of a joyful Catholic life. He has done everything around de Sales from tending to the flower gardens around the parish and school entry, mopping floors, taking out garbage, serving on school board, singing in the choir, “and the list goes on and on.”
“He is a much-loved and faithful servant,” she said.
There are only two reasons he would ever miss daily Mass. Of course, the obvious reason is if he is “miserably” ill, the other is a total distraction – home West Virginia University Football games.
He chuckles as he admits he could argue religion is still involved on those days, because a lot of praying goes on during the games between him and his tailgating buddy Rev. Monsignor Sam Sacus, the former pastor of St. Francis de Sales.
“If we can get tickets, we are there,” he said with a boyish grin. “We love WVU.”
Tipane said he can’t explain his stellar attendance other than the fact that it’s what he’s always done.
“Something always pulls me here,” he said. “Thanks be to God, I’ve been blessed.”
#FaithInWV
#PutGodFirst