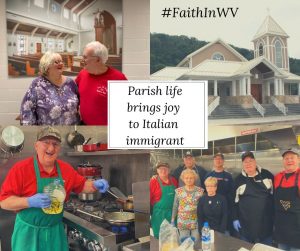 Tony Polsinelli is proud of his Italian heritage. It taught him the value of hard work. He is also proud of his faith journey, and he won’t shy away from telling you that God gave him the vision to fill his life with parish activity in order to be able to face challenges with confidence.
On May 28, 1968, after eight-and-a-half days on the Italian ocean liner SS Raffaello, Anthony “Tony” Polsinelli arrived in the United States. He was a 17-year-old boy traveling with his father Eginesio Polsinelli and 13-year-old sister Lucia, to meet an uncle he’d never met and begin a life, where his parish would become his lifeline.
The trio’s journey took them to Benwood, West Virginia, a small town on the banks of the Ohio River with Wheeling at its northern border. They moved in with his uncle, Angelo Polsinelli. Until that day they had never met face to face. Angelo left Italy at 16 and Egineso hadn’t been born. However, through letters the brothers would converse about life in America compared to the life in Arpino, their poor Italian village. 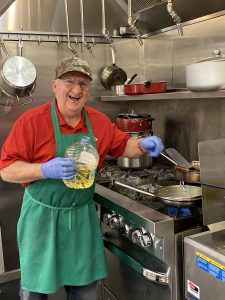 “In our village we had no buses. No television. Only radio,” Polsinelli said. “I remember owning one pair of real shoes, which I wore to Mass on Sundays. Our other shoes were homemade. Most people wouldn’t even call them shoes. There was a lot of poverty there.”
Work in the community centered around the surrounding olive and grape fields. These would annually produce about 2,000 gallons of wine and about 400 gallons of olive oil at the processing mills.
“Everyone – parents and children – would work very hard all day, and once evening came all the people would gather for a big meal and celebrate with each other,” he said. His grandmother had a big role in those meals, but it was her dedication to her faith that Tony Polsinelli remembers most.
“My grandmother, Concetta Giovannone, should be a saint,” he said. “She was so spiritual and had a strong love of God in her heart. She prayed hourly. She had pictures of saints all over one special room in her house, and she would pray the rosary every day. She’d be out in the field (tending to livestock) and would sit for a while to pray.
“I didn’t understand why she would do this,” he said. “It haunted me really. Why would she take up so much of her time to pray? I didn’t figure that out until much later in life.”
Two years after arriving to West Virginia, Tony’s mother Annuziata and brother Frank were able to join them. Sisters, Anna and Iolanda stayed in Italy, because they were already in their 20s and settled. 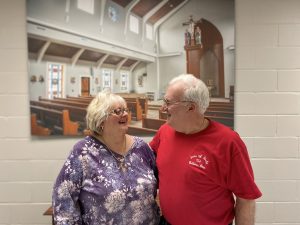 Eginesio was employed by Benwood Mayor Tony Scaffidi as a city worker. Young Tony Polsinelli, who did not know any English, was working as a machinist at a local shop, the trade he learned in Italy. He was also taking English as a second language classes in night school.
What stayed constant from the first days of arriving to America though was the Polsinelli family’s presence at St. John’s Parish.
“Mayor Scaffidi (who was also a parishioner) would tell me there was something to fix at the church, so I went and took care of it, and if I found something else that needed done, we’d take care of that too,” he said. “We were so grateful to him for helping us find work and even a house. We would help him out any way we could.”
It was while working in the church Tony would ask himself, “Am I going to make it here?”
“I wasn’t truly spiritual in those days,” he said. “I felt like I had an empty heart. It was as if God was telling me I needed to do more to fill it.”
So that is what Tony did. He married Janice Ponsetti from Bellaire, Ohio. The two had met while bowling. She was completely smitten with his strong Italian accent and his positive ‘can do’ character. He left the small machine shop and became the lead machinist at Saturn Bronze, where he would later become part owner.
The couple had two sons, Eugene, who is now an assistant principal at John Marshall High School in Marshall County, and Greg, who is a professor of pharmaceutical sciences at the University of Charleston School of Pharmacy, in Charleston, WV.
The family’s involvement at church grew. They helped with the parish school, church council, maintenance committee, religious education of children, RCIA (Rite of Christian Initiation of Adults classes), church street fairs, spaghetti dinners, fish fries, etc.
“That is when things changed for me,” he said. 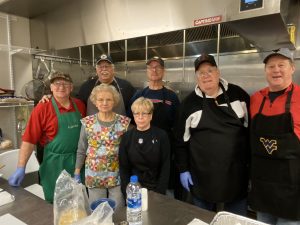 The church had started a youth group and Janice was helping run it. She convinced Tony to attend a youth convention with her, where Father Dean Borgmeyer spoke about the power of reconciliation and finding God’s path for your life through the bible.
It wasn’t long after that the late Deacon Paul Smith encouraged him to attend a men’s retreat. Later the two would discuss the bible and it was Deacon Paul who told me not to just read the bible but to pray right before I read it, asking God to help me understand.
“That is exactly what I did, and when I finally prayed and asked God to guide and give me wisdom to understand the Bible, I was finally moved,” he said shaking his head and looking upwards.
“After all those years of growing up Catholic and going to Mass, I didn’t allow myself to get anything out of it,” he said. “Once I prayed and talked to God before reading the Bible, or before going to Mass, or before leading RCIA or helping with TEC (Teens Encounter Christ retreats) or a Rosary Rally or outdoor Stations of the Cross… I pray I have the will power to understand and the ability to listen, while I encourage others to love God and do the mission of Christ.
“God has blessed me so much,” he said. “I now see church as a place to sit and find answers. I find answers in the Mass. I leave Mass with the attitude that I will share God’s message if not by words by actions.”
Today Tony is busy helping run the parish fish fries, that the church runs the first Friday of the month (except July and August) and throughout Lent. The menu features a wide variety of homemade dishes, but Polsinelli is famous for his pasta with pesto. He volunteers across the river at the Sons of Italy in Bellaire, Ohio; and does maintenance at St. John’s in Benwood, St. James in McMechen, and St. Alphonsus in Wheeling. The couple’s granddaughter Gianna also keeps them busy.
“I keep focus on my church and God,” Tony said. “The mission of Christ is always working through the highs and lows in life. Like here in Benwood, we are a small community and the most beautiful part of it is we are like a big family. When we have challenges and worries, we remind each other to have faith. I know the angels will show up and all will be good, but we have to be willing to work together.”
That attitude is reflective of the motto for St. John Parish, “Faith as deep as coal and strong as steel.”
Mark Robbins, who worked side by side with Tony in those early days, fixing things in the church, said the St. John’s community would be lost without Tony.
“Things would be a lot quieter,” he joked. “Seriously though he is never at a loss for words or a story. He always puts a smile on your face. He is a very religious man, a hard worker, and a great friend. There is nothing he wouldn’t do for you.”
Polsinelli said his faith is still growing. He is currently reading two books, both by Joe Paprocki: 7 Keys to Spiritual Wellness; and A Church on The Move. Paprocki is the author of 12 faith formation books all published by Loyola Press.
“I understand my grandmother now,” he said. “God is always with you, but to fully feel His love you have to open your heart and pray. When you pray, you are talking to God. Without Christ the world is empty.”
If you want to learn more about Tony’s story stop by the St. John’s Fish Fry. He will be happy to bend your ear over some fish and pasta. Visit stjohnbenwood.org for event details.
#FaithInWV #FaithDeepAsCoalStrongAsSteel