Love of God and His Church

Strengthens the Bonds of Beckley Couple

Their love story is as much about serving and caring for others as it is about their commitment to each other.

Rev. Mr. Harry and Marcia Evans of St. Francis de Sales Parish in Beckley met as students at Woodrow Wilson High School in the late 1960s. They will celebrate their 51st wedding anniversary on November 27th. The milestone is significant, but so is their story of faith and service.

Soon after they were married, they began their family. They were blessed with four children – Matthew, Mark, John Paul, and Sarah; and now have five grandchildren – Emily, Claire, Lily, Caroline, and Owen. 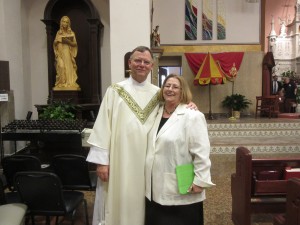 The couple happily recalls praying to have a child that would be called to religious life.

“But instead, God gave me a husband who was to be a deacon,” she lovingly said.

Deacon Harry didn’t grow up Catholic nor did he consider himself being called to serve the Church and the people of God.

“I was raised in the Presbyterian church in which my parents were very active,” he said. “I was baptized there at the age of 13, but like many young people of the time was not so concerned with issues of faith.” It was ten years after they married that Deacon Harry chose to join the Catholic church “for the sake of my children.”

He began the Rite of Christian Initiation of Adults (RCIA) at St. Francis de Sales. “I have to admit I was not initially an enthusiastic candidate,” he said. It was after attending a Cursillo weekend he had no doubt he was on the right path for his faith life.

“I had a real conversion experience at the weekend which kicked off my true faith journey.”

“Cursillo was one of the many ‘renewal’ movements of the time and very popular in the diocese,” he said. “Upon receiving full communion in the church, I became very active in the St Francis de Sales community. After having been involved with various parish ministries over the years I was always intrigued by the possibility that I might someday pursue the diaconate. This was greatly influenced by the two deacons that we had in our parish, Don Wise and Jay Ziolkowski who coincidentally were both in the same Cursillo weekend that I attended in 1980.” 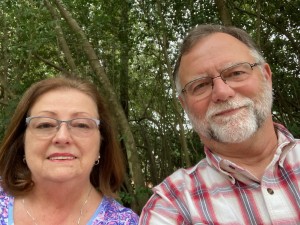 Deacon Harry entered the permanent deacon formation program in 2011 and was ordained after five years of study and prayer on May 7, 2016, at the Basilica of the Co-Cathedral of the Sacred Heart in Charleston.

While the ordination was spiritually spectacular, he said, it is “being allowed to share in people’s lives in good times and bad (that) is most significant to me. For me the Diaconate has been a blessing in my retirement, giving my life a new meaning and helping me to overcome self-serving tendencies by providing many opportunities to serve others.”

His formation and service has been enriched with the help of Fathers Paul Wharton and John Finnell.

“I have many fond memories of our formation time forming a community of men who prayed, studied and shared a passion for serving the people of God,” he said. “As a deacon I have had

many opportunities to serve the people of St Francis. I have had the pleasure of witnessing marriages, preaching, leading RCIA, and baptizing children. I have had the honor of performing wake and funeral services, visiting the sick and shut in and just being present in time of need. I have been called to participate in special rites at the Co-Cathedral such as the Rite of Election and the Chrism Mass serving with our Bishop. Many of these things are not always easy but always come with a blessing and contribute to my spiritual growth.”

His greatest influence, he enthusiastically shares without hesitation, is his wife. If it weren’t for “Marcia and her faithfulness to the church I would not be where I am today. I have always said she would probably be a better deacon than me when it comes to service,” he said. When their children were still young, Marcia had read a book from the church library – The Story of Birthright. She was so moved by the idea of helping women with unplanned pregnancies, she rallied several friends to read the book; and ultimately begin a Birthright center in Beckley. That was 38 years ago, she has served as director for 20 of those years. 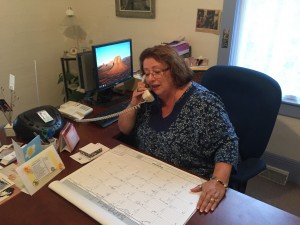 Marcia grew up Catholic, but her childhood home was not the typical one.

“At a very young age my father left our family,” she said. “My Mother with five young children moved in with my grandparents. They provided a good Catholic home where we always attended church at St. Francis de Sales.”

The family didn’t have a car, so they would find rides to Sunday and daily Mass through the kindness of various neighbors.

“I had the most wonderful role models,” Marcia said. “My grandmother was a wonderful example she cooked cleaned and sewed for all nine of us living in our home. She was a member of the Catholic Daughters and was out volunteering at nursing homes. My mother was a nurse and was totally dedicated to her job and raising her five children.”

Her faith formation was admirable because of these women, “I have always felt so blessed and have been able to go to daily mass as long as I can remember. Receiving the Eucharist daily and knowing that was the source and summit of my faith and what has sustained me through the years.”

That spiritual and emotional confidence is what motivates her to serve women in need at Birthright with an empathetic, loving heart. 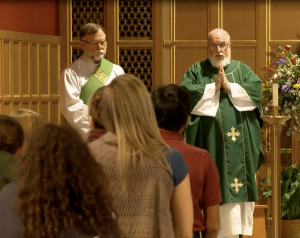 It has been through these stories and the kindness of others (the individuals and church groups, quilt groups, girl scouts, giving baby showers, boy scouts building ramps, etc.) that have made her realize that “I have received many times over, more than I have given,” she said.

The success in their service and in their marriage has been because of their Catholic faith.

“It is a blessing to be able to share our faith as a couple while having separate ministries” God called them to do, she said.

Every day after his morning prayer routine Deacon Harry sends a text message to his children, their spouses, and his grandchildren. The text is a prayer to start their day.

Like St. Monica, Marcia’s favorite saint, we all need to humble ourselves to Christ and His teachings. We need to pray unceasingly for our family and their needs no matter how overwhelming they may seem, because as the mother of St. Augustine said, “Nothing is far from God.”