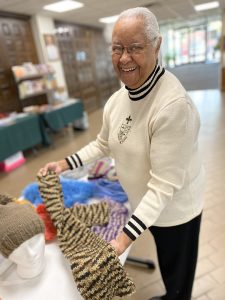 Her hands are withered with arthritis, but her kindheartedness is ever blooming.
Mary Henderson can be described as a sweet 81-year-old lady, who wears her hair in a tidy braided bun, and walks softly wherever she goes. She is a graceful, gentle spirit, dedicating her time into fostering a ministry that wraps women and children in despair with love.
Henderson wanted to be active in her parish, Blessed Sacrament Church in South Charleston. She has religiously attended Mass, participated with the bible study group, happily supported parish fellowship events, but that wasn’t enough.
“I wanted to do something to use my skills to help others,” she said. “I thought about how I could give back; and my first thought was, ‘I love to knit’, so why not? I went up and asked Fr. John (Finnell), ‘do we have a knitting ministry; and if we don’t, can I start one?”
The answer was, no, there wasn’t such a group, and yes, “go for it.”
“So, it began,” Henderson said. She named the group Purls, a name of the knitting stitch.
Although those who know Henderson well might all agree her group could also be called Pearls of Wisdom – in light of her shining example of how to live humbly by doing for others without seeking the spotlight. 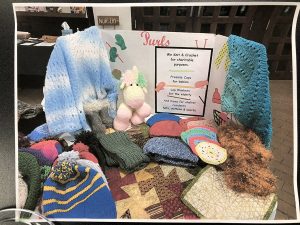 In its first year of inception, three ladies in the parish joined Purls. They met once a month and decided they would make scarves, hats, blankets, socks, and wash clothes to benefit women and children in local shelters, women at the YWCA, and young children through the Gabriel Project.
“(Mary) does it as a labor of love,” said Natalie Zellers, parish office manager. “It shows these women and children, who received these precious gifts, that they can be loved unconditionally by someone that is not even present in their life – someone that you don’t even know cares about them.”
Today, six years since Purls formed, the group is 21 members strong. Several members didn’t know how to knit until they became a Purl, but Henderson and the rest of the Purls welcomed them with open arms. 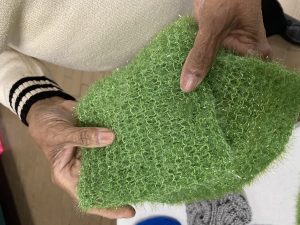 Summarizing Henderson’s everyday wisdom and drive is simple – you don’t have to always preach about God, but what you should do is live in a way that others see Christ in you and your actions.

For more information on how you can start up your own Purls knitting ministry email BlessedSac@suddenlink.com