Hurricane’s Will Dempsey chooses to live his life with an “actions are greater than words” mindset.
We all know of the poverty and suffering in the world and our own communities, whether they have resulted from horrific tragedy, natural disasters, or our own doing. As Christians we talk about how we are God’s hands and feet, but are we really doing enough? Dempsey does not sit back and take that question lightly. His purpose driven path in life is a call to action, proving he is a man that honors his faith, country, and family.

“I look at my kids and think of the world I want them raised in versus the one they are in now,” he said. “We must be better for the next generation.”
It is that thinking that made him an obvious choice for the WV Knights of Columbus’s Knight of the Year. He is the Grand Knight of the Hurricane Bishop Hodges Council #9483.

Will and his wife Elyse have been married for five years and have two children – two-year-old Conor Kasmir, and one-year-old Daniel Allen. He didn’t grow up Catholic, but Christianity and a Christian way of life has always been important to him.
Dempsey went through the RCIA program at Ascension Parish in Hurricane and entered the Catholic Church in 2014. Becoming Catholic for Dempsey was like coming into a family of “like-minded individuals with a great foundation of faith along with growth potential worldwide,” he said.
Within a year after converting to Catholicism, Dempsey joined the parish’s Knights of Columbus (K of C). He said becoming part of a group that is centered around faith, family, charity, and unity was a natural fit for him.
Dempsey has been active in the Army National Guard since 2006, first as a combat medic and now serving as an industrial hygiene tech and radiation safety officer since 2012. 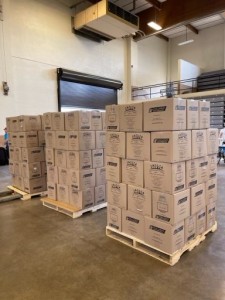 Last year Dempsey attended training in Maryland for Cross Catholic Outreach’s food packing events to battle hunger on an international level. He then was able to help K of C organizations in Charleston and Clarksburg pack more than 140,000 meals. Additionally, he recruited several guard-personnel to assist packing 4,000 meals that were donated to the Mustard Seed Food Pantry.
Those who know him can describe him with the same characteristics as the Knights’ founder Blessed Father Michael McGivney – a gentleman who is a roll up your sleeves, get your hands dirty, determined to make a difference for a stronger community and better world.
“Being a Knight is the conduit between my military service and my civilian career path that allows me to give back and build up both our local community and abroad,” he said. “It is a straightforward brotherhood that closely relates to the support you get in the military. It allows you to surround yourself in similar spiritually minded individuals that you can bounce opinions or decisions off of for a clear faithed based conclusion. 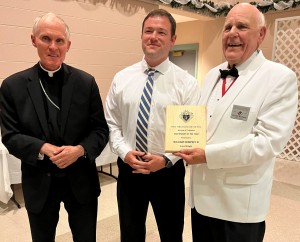 As an added bonus, the K of C looks out for its members and their families with their insurance benefits. He said it’s “the closest thing I have found to compare to my military SGLI (servicemembers’ group life insurance) to better provide security for my family long term.”
We all have so many challenges in life, whether they be about faith or family, but being able to consult with others that have the same morals and values is key to a happy life. That someone for Dempsey is the entire Knights’ fraternity, and specifically, Chris Rock of Ascension Parish. “He is the first catholic that comes to my mind when I think ‘a catholic’, ‘a knight’, and ‘a father’.”
He hopes all Catholic men who are not already members to take that leap and become involved with the K of C.
“They are not just a men’s group at the parish,” he said. “It’s a group of people that helps all those around them regardless of differences through Catholic charity, as (we) grow in faith.”
Choosing to grow in Christ, and be the best version of ourselves in order to help others is how Dempsey is made. Now that he has the eyes of his children on him, he knows his example is everything.
“I want my wife and kids to know that everything I do is both for them and because of them,” he said. “I truly am a better person every day, because of them and the life we strive to build.”
At home, in his parish, and in his community, Will Dempsey is a great example of #FaithInWV!