Radiant presence is a present

Walk into her office and you’ll be greeted with a heartwarming smile. Catch up with her and her family during an outdoor adventure and you’ll be treated to her contagious laughter. Yet the most attractive and impressive thing about Colleen Roderique Criste may be her beautiful heart and glowing spirit – an asset that is benefiting countless young adults at the St. John University Parish Newman Center in Morgantown.

Criste grew up a cradle Catholic in a strong and faithful family, but until two years ago she didn’t realize how much her upbringing, raising 8 children in this ever-changing and challenging world, and committing to take time for herself for continuing education of mind and spirit wo

uld inspire her to be so inspirational in her role as director of programs for Campus Ministry at WVU.

She was born and raised in southern New Jersey, but up until two years ago, when she moved to Morgantown for her husband’s job, she called southern Virginia home. 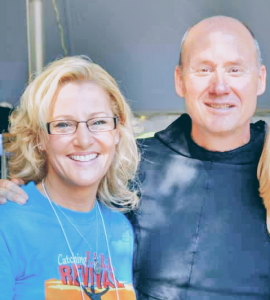 “I grew up surrounded by priests and religious,” she said. “It was a regular thing for us to have priests over for dinner, joining us on family vacations, and having private Masses in our home. I never realized how unusual that was!”

Her father Ray Roderique was a deacon, known as Deacon Ray Rodrigue (taking the original ancestorial spelling of his last name). He and her mother Mary Kathleen were prayer ministry leaders in their community. Her uncle, Fr. Ed O’Connor, was an author and theology professor at Notre Dame University. Her aunt, Sr. Maria, was a nun with the Sisters of Mercy. Her brother, Fr. Ray Roderique, is a priest for the Diocese of Newark, and two of her cousins, Fr. Jon Mary Foster and Mother Magdalene Foster, founded and belong to an order called the “Mission of Divine Mercy” in Texas. 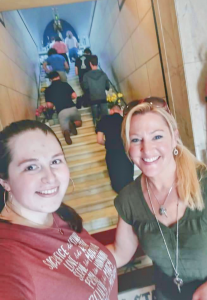 “I would describe my faith as a blend of constancy and flux, if that makes any sense,” she said. “From a very early age I knew who Jesus was and I had a strong personal relationship with Him. However, no matter how religious the upbringing, it cannot replace the fact that you must embrace faith and walk in it for yourself. No one can do it for you.”

Her journey through life led her into and through heartbreaking challenges, but thankfully she had the heart and mind to listen to people who let Christ speak to her through them.

“I rebelled and rejected the Church for many years,” she said of her young adult life. “I didn’t attend Mass and lived a life bent on self-destruction. It wasn’t until I reached my lowest point, when I desired death more than life, that I got down on my knees and begged God to help me. I made a promise to Him that night. I said, ‘God, if you are real, if you will change my life, I promise I will serve You every day for the rest of my life.’ That was the beginning of everything. Three days later, I attended Mass for the first time in years. It was at Holy Cross Catholic Church in Lynchburg.”

As fate would have it, Holy Cross is where she ended up meeting her future husband Dan Criste “in the ‘Donut Line” after Mass. We were married one year later, and have 8 children: Daniel, Jacob, Mary, Isaac, Abby, Joshua, Elijah, and Aaron. We also have 2 babies in heaven: Joseph and James.”

When the family moved to Morgantown, they joined St. John’s Parish. It was a year later in July of 2020, when she took on the role of Campus Minister at the invitation of Fr. Brian Crenwelge. 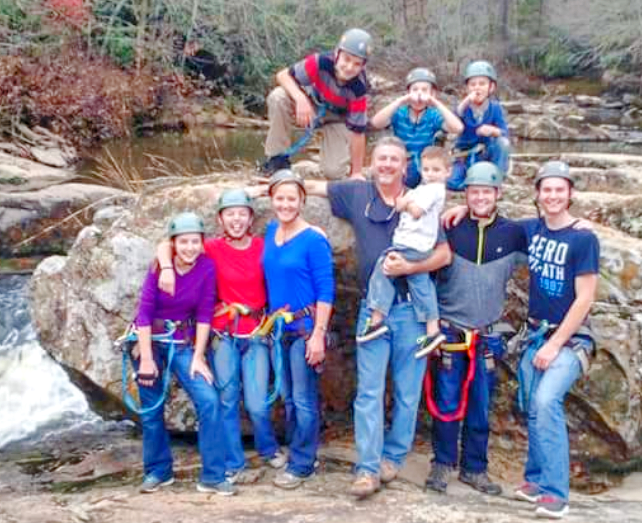 Colleen, her husband, and their eight kids.

“I was hesitant at first, because I had never done campus ministry before – never even considered it,” Criste said. “But then I remembered a prophetic word that had been given to me just days after moving to Morgantown by a Catholic Evangelist named Mary Bielski. She went out of her way to share this message with me. – ‘The Holy Spirit is telling me to tell you that God has called you into a new mission field. Your new mission will be ministering to young adults, specifically young adult women, and it will flourish!’”

Criste met Bielski at a Steubenville Power and Purpose Conference. Between sessions Bielski, whom she’d never met before approached her thinking they’d been acquaintances.

“I assumed she was just some enthusiastic person from the audience,” Criste remembered. “It wasn’t until the next day that I discovered she was actually one of the keynote speakers for the weekend and had the gift of prophecy! I still get goosebumps when I recall her words!

I had no idea at the time how any of what she said could happen.”

Needless to say, Criste was baffled.

“We knew almost no one when we moved here,” she said. “We had few friends or anything that could even remotely lead to what she had said. But then, the campus minister’s job offer happened, and I accepted it; trusting in the God Who has proved Himself again and again and has never failed.”

Her typical day at the Mountaineer Catholic Newman Center is graced with a mini parade of co-eds stopping by her door to say “Hello.”

“Colleen has been such a Godsend in so many ways to our Newman Center,” said Fr. Crenwelge. “She brings a warm, motherly presence to our students. Many of them affectionately call her ‘Mom.’ I’ll walk by her office countless times a day, and she is with a student, listening to his or her relationship or family struggles.”

The informal title “Newman Mom” is cherished by Criste.

“I love each and every one of the students as if they were my own,” she said. “I care about the things that are troubling them or weighing them down. We will often just sit and pray together, and they will leave with a little less stress and more peace. We laugh a lot too!”

No matter what life throws at you, God is always there waiting to help, Criste said, adding that it is important to look outside of who we are and remember whose we are so we can help others. One of her favorite bible verses is Isaiah 30:15 – “in quietness and in trust shall be your strength.” It reminds her “Although I may not be the strongest, most confident person, God can still use me,” she said.

“What motivates me every day is knowing that we have a finite amount of time on this earth to make a difference, but we also have the most incredible opportunity to be the instruments that God uses to change lives forever,” Criste said. “If we can help young adults now to know the love of God for them, His forgiveness, and His mercy, then we have done our jobs well. They will leave the campus of WVU better, stronger, and holier, and that can only impact the Church in the best possible way!”

She said we all need to rely on Jesus and call upon him to “use us to serve others.” In doing so, we also need to seek spiritual advisors to keep us motivated.

“One of my strongest spiritual mentors is Fr. Dave Pivonka, President of Franciscan University of Steubenville,” Criste said. “He continues to inspire me with his humility and deep dependence on the Holy Spirit to do the work he has been called to do.”

She wholeheartedly believes she is an effective campus minister because of the power of the Holy Spirit.

“To be perfectly honest, I wake up every morning feeling a little nervous about the day,” she said. “I recognize the gravity of this role, and I don’t always feel equipped to do it. But then I think of this quote: ‘God does not choose the ones who are equipped, He equips the ones He chooses.’ I ask the Holy Spirit to fill me with His grace, strength, and gifts; to minister to the students through me. Not by my strength, but by His. Not my will, but His. In the end, my hope is that every person I have encountered in life will know that they were loved.”