He came to the diocese in May of 2017, serving his first month at St. Vincent de Paul Parish in Wheeling, before he was assigned to St. Paul Parish in Weirton, where he served until Feb. 1, 2018, when he was appointed to be administrator at St. Peter the Fisherman Parish in Fairmont.

He was born in the beautiful coastal state of Kerala, in south-west India. He is one of six children of Matthew and Aleykutty Konikattil. They are a farming family with strong Catholic roots.

“We have a written family history as Catholics tracing back to the 15th Century A.D,” he said, adding that the family may have been Catholic for several centuries before their written history, as St. Thomas the apostle was in Kerala in 52 A.D. evangelizing many families into Catholicism.

“The seed of faith sown in me as a kid began to grow in later years,” he said. “I was born as the fourth child and the first male in the family.”

It was tradition for the firstborn son to be baptized with the name of the paternal grandfather, which for the Konikattils was “John.” However, his maternal grandfather insisted he be named Joseph. So, against custom the parents agreed to baptize him after St. Joseph.

When young Joseph was born, he suffered a birth defect in his leg that worsened in his toddler years.

“Doctors told my parents that ‘this child may not able to walk properly in life,’” he said.

It was once again his maternal grandfather that stepped in.

His grandfather was a stellar example of his family’s unwavering faith. There are nearly 20-million Catholics in India, but that makes up for less than 2-percent of the population. Kerala is considered one of the strongest Christian regions of India with 20-percent believing in the teachings of Jesus Christ.

As a young boy, Joseph wanted to be a scientist, however the older he got the more significant his faith became in his life.

At age 15, after completing his sophomore year of high school, he chose to start seminary.

He left home in 1986 and traveled about 2,500 miles away. It took him four days and three nights by train to get to the seminary in Manipur – a north eastern state of India close to China and Bangladesh. It is a tribal area.

“Manipur is a small mountain state with a population of almost 3-million,” he said. “Metei (Hindus), who are the majority group in the state, then there are Kuki and Naga peoples, who speak a variety of Sino-Tibetan languages. There are many sub-tribes that have distinguished dialects and cultures that are often village –based with more than 36 dialects. Manipur was a princely state until King (Maharaja) signed a Treaty of Accession merging with India in 1949. This merger has been disputed by groups in Manipur as having been completed without consensus and under duress. The dispute and differing visions for the future have resulted in 68 years of insurgency in the state for independence from India, as well as in repeated episodes of violence among ethnic tribal groups in the state. 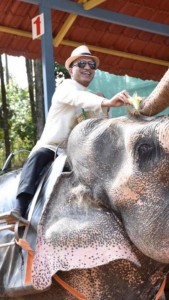 Fr. Joseph riding an elephant in his native India

“Thirty-two militant insurgency groups are responsible for many violent deaths in Manipur,” he noted. “The Catholic Church, officially started in 1952, and became a diocese in 1980, suffered terribly at the hands of insurgents.”

By the age of 29, Fr. Joe, was too familiar with those unthinkable acts.

“Many missionary priests became martyrs and many others got physically or mentally tortured or abducted by the insurgent groups,” he said. “My best friend and companion priest, and other 3 priests were martyred by the terrorist groups (in 2000-2001).”

His faith could have very easily have been shaken from his core, but instead his calling became more impassioned.

“A priest is for all and it is not a career, but a calling to witness Christ through life and proclamation,” he said. “I experienced the abject poverty of the tribal communities and learned to live with them by getting used to their food, habits and culture, learning the dialects to communicate with them, tried to empower them through gospel values, and liberate them from their pagan practices and terrorism through education. I had to make many missionary journeys lasting many weeks, traveling from village to village on foot for several hours a day and return to the parish only after a month or more. The tribal communities who are originally head-hunters live on the top of the mountains in the remotest areas where there are no jeepable roads or electricity. We reached their village after a day’s journey on foot and stayed with them for a few days and slept in mud plastered rooms where snakes, rats and other insects would be crawling around. It was all to fulfill the mission of Christ to evangelize them through teaching the Catholic faith and celebrating the sacraments with them.” 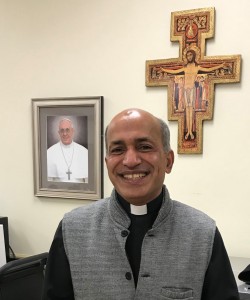 His horrific experiences of being both abducted by terrorists and witnessing his brother priests being martyred spiritually marks the territory as, “a land of religious vocations now. It is true that the blood of the martyrs is the seed of the church.”

He pointed out that the mission diocese has more than 100,000 Catholics, a tribal/local Archbishop, more than 100 local priests, and 400 religious nuns excluding the missionary priests and religious.

He has no doubt he was meant to be a servant of God. He quotes Isaiah 52:7, “How beautiful upon the mountain are the feet of him who brings glad tidings (Isaiah 52:7).’ He emphasized, “I am here in this beautiful mountain state of WV to proclaim JESUS CHRIST!”

To become “an effective educator as part of the mission of the church,” he holds five bachelor’s degrees, three master’s degrees, and a doctorate in American literature.

He taught high school for two years as part of his training in seminary. He continued to be associated with schools at all levels including collegiate his entire priesthood as either dean of studies, vice-principal, principal, superintendent or president.

He said in India he wanted to educate “youth to liberate them from terrorism and poverty and to give a future with hope and meaning.”

In West Virginia, he hopes to help the faithful young and old, and to “become all things to all people…. Run as to win” (1 Corinthians 9:22-24).