Panting and his heart pounding, he made it to the bus stop, but only to watch the motor coach’s taillights in the distance. Spatafore ended up walking the six miles home to the North View section of his hometown. 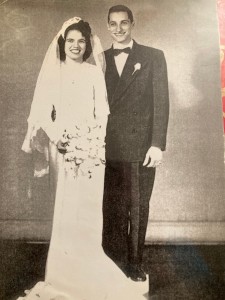 Young Joseph “Jobey” Spatafore was smitten over his Anmoore darling, Josephine “Jay” Vallelonga, and that particular night he just couldn’t pull himself away from her company fast enough.

“She was worth it,” he said. “But believe me, I only had to miss that bus once to know that I better start saying ‘Goodbye’ a bit sooner.”

He was born in 1927, one of the eight children of Joseph and Rose Spatafore, who were founding members of St. James the Apostle Catholic Church, in Clarksburg. He met Jay on a blind date set up by his cousin, who at the time was dating her sister.

“She stood me up on what should have been our first date,” he said firmly, while Jay shook her head in amusement.

Sitting in their North View home they bought in 1950,  the couple happily reminisced about their love story, both agreeing that it has been their Catholic faith and involvement in their parish that has not only kept them both active at 92 years of age, but also strong in their marriage.

They will celebrate their 72nd Anniversary on November 13th.

“I knew she was from a big Catholic family like mine,” he said. “Heck I met her whole family, on our first real date, when I took her to the Robinson Grand (Theater).”

Jay was also one of eight children. Her parents were Cosimo and Mary Vallelonga. They attended St. Francis of Borgia in Anmoore (formerly Grasselli).

The couple had been seeing each other for nearly a year, when he looked  at her one day and said, “If I would ask you to marry me, would you say ‘yes?’”

Five months later in 1948, they were married in a traditional ceremony at St. Francis with Father Charles Carroll officiating.

The couple moved to North View and raised three children – Lenora Jo (Boyle), Richard, and Mike, who is the director of religious education and youth ministry at St. James. The Spatafores have six grandchildren and five great grandchildren.

“There’s another (great grandchild) on that way,” Jay joyfully added. 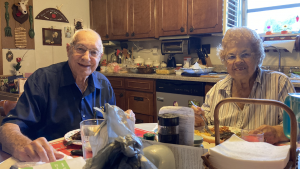 Fourth of July 2020:
Jobey and Jay enjoying a Fourth of July dinner this year in their North View, Clarksburg home, where they’ve lived since 1950.

“We have had such a wonderful and happy life,” Jobey said. “I am 100-percent certain that it’s because of our church life. Our marriage has always been blessed, and our kids respect and love us to pieces.”

His advice to men wanting a long and happy marriage is to know, “The husband has got to make sure he gets in the last words! Although they better be, ‘Yes, dear,’” he said grinning and falling back further into the couch.

Jay rolled her eyes then looked at him insisting in a corrective tone, “It’s gotta be 50/50.”

“She’s right,” he said. “You have to understand and accept that the other person is going to have a different idea than you, but as long as you love and trust the good Lord, it will work out wonderfully.”

Whether it was being involved with the old parish school or anything that happened in and around St. James, the couple took part in helping however they could.

Through the decades a lot has changed at St. James. The interior of church has been remodeled, exterior steps were removed for easier access, a community room was added, and the life-sized copper statue of St. James was installed. The Spatafores were always present to lend a hand, donate, or help work events to raise money for all the improvements and upkeep. Being involved in choir, Rosary Altar Society, and Knights of Columbus has also been, as the couple said, “what we do.”

Never did the Spatafores dream they would not physically be in church for months. Even on vacation one of the first things the family did when they rolled into town was find out where the Catholic church was and what time Mass would be.

When the current pandemic hit, the couple stayed true to their faith life, knowing they need to weather the storm. How? “We choose not to be left out,” he said.

“We still feel involved. The priest calls to make sure we are doing good, (parishioners) check in on us, some bring us food, and we enjoy calling them too. We can still be close even though we have to be away. I know everyone at St. James is doing their best to keep safe.”

Once they are able to return to Mass, Jobey plans on going right back to his duties as altar server for the parish funeral Masses, and the couple is looking forward to helping in the kitchen this Christmas with the church’s famous pita piata bake sale, and in the spring with the Easter bread.

“I do miss being at Mass,” Jay said. “I know it’s just a building, but nothing can completely replace it or the interaction. Plus, I miss going out to eat afterwards.”

In the meantime, the couple enjoys watching the televised Mass from the Cathedral of St. Joseph on Sunday at 11 a.m. or they will watch Father Stephen Vallelonga’s online Mass from St. Margaret Mary Parish in Parkersburg. Father Vallelonga is their nephew.

“We participate from home, reciting our parts, and enjoying the sermons,” he said. “It is hard to be away, but better safe than sorry.” 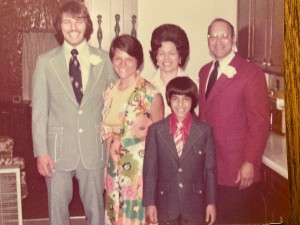 The Spatafores with their children Richard, Lenora, and Mike, circa. 1975.

When Jay’s father was a boy, he survived the Spanish flu of 1918. The family didn’t pass down details to the following generations, other than he had to take some sort of medicine that made him sleep “for days.” Troubled times were not uncommon then. People fought through a lot of hardships like World War I, then World War II, and the Great Depression.

The Spatafores believe those hard-hitting challenges are all the more reason why their families considered the parish extended family. As children, throughout their marriage, and still today they believe it is all the activity at the church brings people closer and confident.

“I explain to everybody that will listen, to be successful and have a happy family you have to get up and go to church,” he said. “You gotta be part of that church, have unrattled faith, and believe God knows what is best for you. That’s it. That’s what it comes down to. Despite tough times, good things will always come.”