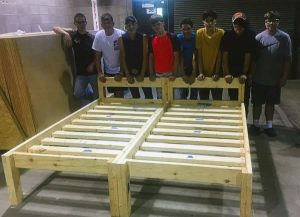 Organizers of the Gemini Project at St. Joseph’s Parish in Huntington insist God is working through them to help children within a foster care system that is in crisis.
“This project is truly driven by God,” Jim Jeffrey said. “We are just the vehicle. It’s definitely a calling. I’m so glad we listened. We hope others around the state do too.”
The project is a true labor of love. Jeffrey and his friend Danny Vance began the Gemini project in August to build beds for children in foster care.
“It’s sad enough that these children are not with loving parents and in too many cases are placed in the homes of total strangers, but then add to that the fact that these children aren’t guaranteed to have their own bed, that’s distressing,” Vance said.
The number of children in foster care in the state of West Virginia has risen 67% in the last six years. The WV Department of Health and Human Resources have more than 7,000 children in state custody, of those 85% have at least one parent with a drug addiction. 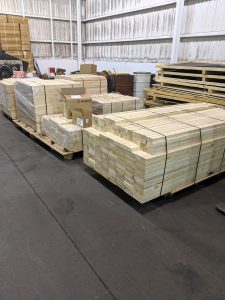 “Because the number of children needing foster care far exceeds the number of available foster homes, the state is having to make exceptions in order to find these children safe shelter,” Vance said. “The policy is every child is to have their own bed, but that doesn’t happen now. Children are sleeping on couches, floors, or wherever the foster care family has space for them.”
The men became aware of the heartbreaking situation through Jeffrey’s wife Terry. She is a volunteer cook at Royal Family Kids Camp for foster children. Another volunteer at the camp, told her about a church in Ohio that was seeking volunteers to make beds for foster children.
“Jim and I went over one Saturday morning to help,” she said. “We spent the day constructing four beds. We were so taken in by this mission. We wanted to do more, so our efforts grew from there.” 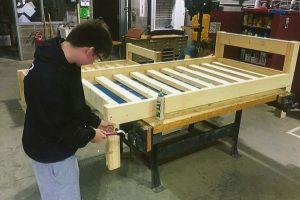 The Jeffreys shared the program with Vance and he offered to figure out some of the logistics.
He worked in his basement workshop and cut the wood to make three beds. The men constructed them in the parish rectory garage.
The team doesn’t stop with just making the bed frame. They also provide the mattress and all the bedding.
“I got to go out and do one of the deliveries,” Vance said. “There was this little girl in Charleston who needed a bed. She was about 13. I’ll never forget her. She was so excited to have a bed of her own complete with sheets and pillow and comforter. And for whatever reason that day, when I went to the store to pick up the bedding, I saw a rug, nothing special, just a fuzzy rug that matched the bedspread, so I bought it too. Well, let me tell you, when I pulled out that rug, that little girl couldn’t believe it. She was so elated. ‘Is that for me too?’ she asked. I paused. I was amazed. ‘Well, yes.’ I told her. She grabbed it up and hugged it.”
Vance stood speechless.
“We don’t understand sometimes, because we aren’t in that situation,” he said. “I am blessed. So, blessed. We take so much for granted.”
Vance referenced Luke 12:48, “those who have much, much is expected.”
“I’ve been blessed with so much more in life that I ever deserved,” he said. “God tells us we need to share our blessings and give back. I am just doing my part.”
After those first three beds the men were motivated to do more, and indeed they did. 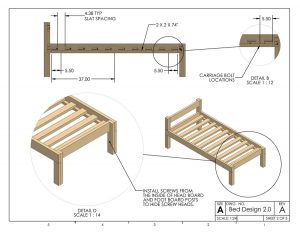 They secured a $1,000 donation from Catholic Charities of West Virginia and a matching gift from St. Joseph Parish. The cost of making a bed is $200, so they knew they could make another 10 beds.
Jeffrey works with at Darco International and a co-worker came up with a “jig” to make the production of the bed more efficient. It enabled them to cut out the lumber for 10 beds in 30 minutes, a fraction of the time it took Vance in his basement. The parish had a sign up to construct the beds and all ages came out to help. Within four hours ten beds were completed.
“It was such a great feeling,” Jeffrey said. “But we knew that was only a small dent to what is needed.”
He said, they had the will to work and God definitely gave them the work. The materials and labor appeared to be a challenge, but God has been helping with that too, Jeffrey said.
“It’s much like the loaves and fishes story. At first it appears that we don’t have enough, but then it ends up that we seem to have an abundance of help and materials to make even a greater impact than we set out to do on that particular day.” 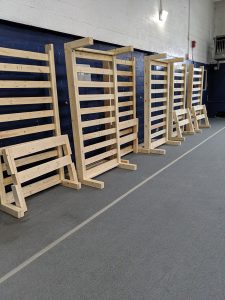 Jeffrey and Vance contacted the Cabell County Career and Technical Center to see if they wanted to get involved.
“We met, explained the situation, and showed them one of our beds. They jumped in with both feet,” Jeffrey said. “We buy the lumber and drop it off. The students worked out a plan and specifications, and on their site, they assemble beds. It’s a phenomenal partnership.”
The students involved are proud to be a part of the Gemini project.
“The kids have told us that being involved makes them a better person and they are fortunate to be a part of something, where they can make a difference,” he said. “It’s a true gift from the heart.”
In six months, the Gemini project built and donated 37 beds. 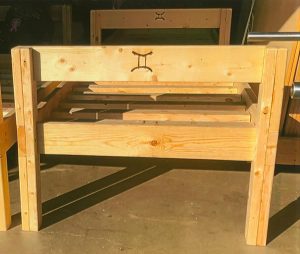 “Our hope is to have this project duplicated all over the state, so no child is without their own bed,” Jeffrey said. “I never dreamed we’d have the support we have received. It’s God’s hand. It isn’t an impossible task. God’s proven that through us.”
The men received a call from someone who had heard about what they were doing and wanted to make an anonymous donation.
“He and his company want to buy, cut and deliver two pallets of lumber for the bed frames,” Jeffrey said. “This will build about 56 beds. Glory to God!”
What’s in a name? Where did the Gemini project name come from?
The men wanted to name their project, so they met with their St. Joseph pastor, Fr. Dean Borgmeyer.
“We sat around and told him all about the project, how it all started, and what it all entailed,” Vance said. 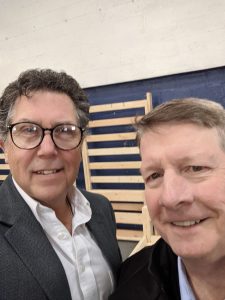 He started with the basics for Borgmeyer.
“Jim and I were ushering at church…. Jim and I are in the men’s group together…. You know, Jim and I work the men’s dinners as cooks…. Jim and I heard about this dire need….”
Fr. Dean Borgmeyer sat shaking his head and laughing.
“I kept hearing, ‘Jim and I this’ and ‘Jim and I that’ so I thought, ‘ah ha! Gemini!’ It’s so close to Jim and I. Plus, it is a Latin word for twin. That’s the style of bed the men are making. Perfect!”
The men concurred. So, the name was coined. Now the beds have a Gemini sign stamped on them.
For more about the Gemini project, including the plans and how to begin your own bed construction project to benefit children in West Virginia contact them at terry3161@me.com
#FaithInWV #GeminiProjectGodsHand