Miracle Behind the Music

When the late Father Leroy Beyer handed her the keys to the church the summer of 1993, she happily accepted them with a grateful heart, knowing she had a significant promise to keep. 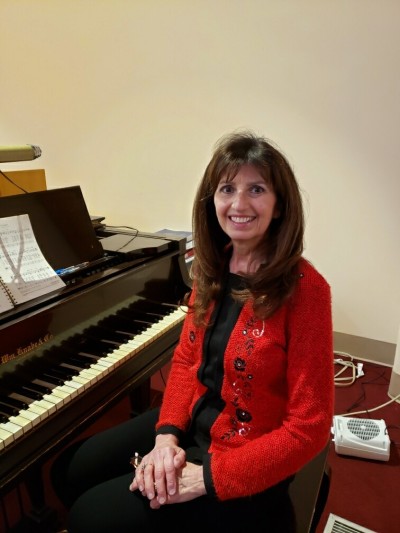 Judy Perhacs Doyle has been playing the organ, piano, and even the accordion for St. Jude Parish in Glen Dale for nearly three decades. Many current parishioners do not know her story, but the ones who do have a deep appreciation not only to her for sharing her talents, but also to God for gracing their Eucharistic celebration with her presence. They are the parishioners who gathered in the church at 6 a.m., on July 1, 1993, for an around the clock prayer vigil for the beautiful young mother of two, who just two years prior had joined their church family. Doyle was having brain surgery that day for an aneurysm.

For the days and weeks prior, family, friends, and members of the St. Jude community pitched in to help her husband Pat and their two children Jack, who was 9 at the time, and Danny, who wasn’t even three yet.

Judy had been out for a run, June 14, 1993, when she was overcome with a massive headache. She sought medical attention, but her symptoms were excused as a migraine. A few days passed and there was no relief, symptoms worsened dramatically, and on June 19 she was placed in the intensive care unit (ICU) for observation and further testing. Doctors found a blood vessel had burst in the exact center of her brain. On July 1, after a full day in surgery they successfully clamped the blood vessel.

While her family and faith community prayed for a miracle for Judy, Judy had been praying for everyone but herself. “I prayed for Pat,” she said. “We had two very young kids. Our youngest was potty training. I prayed for my family and friends. I knew they would help with my kids. I prayed for the surgeons to know what to do. I knew my surgeon was Catholic and would also be praying.” 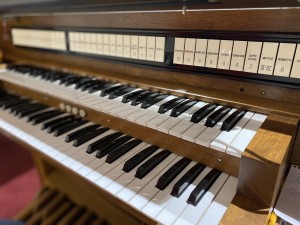 She admitted she did more than pray during those long days that led up to the surgery. She felt the presence of St. Jude her parish patron, her late father and brother, and all her loved ones in heaven, asking all to pray her family gets through this.

“I talked to God,” she said. “I knew if I was to survive, I would step up and take on the responsibility of being the organist at church. I’m not really an organist though. A musician, yes, but a refine and impressive organist, I am not, nor do I pretend to be.”

She knew her church had a great need for an organist. Her pastor, Fr. Beyer, whom she knew as a child at St. Paul’s in Weirton, had asked her months before if she was still playing the piano and would consider playing at the Marshall County parish. He had remembered her playing at the Hancock County parish, something she did since she was 11 years old. Because of the pressing needs of her young family, and the time she knew it would take to do the job justice in her mind, she turned Fr. Beyer down.

She was a math teacher, a job she absolutely loved for 41 years.

“I enjoyed teaching, but I also loved the opportunities we would get to entertain our students,” she said. “I played the accordion for special assemblies at (Wheeling Park High School), when we would gather the children for (seasonal) sing-alongs, and multicultural days. Some of my favorite memories of teaching were those days, when we put all of our worries aside and came together despite any clicks or divisions to play, sing, and listen to music.” 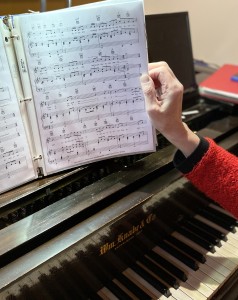 Her love of music was fostered by her parents, Joe and Anne Perhacs, and her brother Jeffrey.

“I had taken lessons on the accordion since I was five or six, the piano at age 10, and ended up playing the organ at age 11 without any organ lessons,” she said. “Music is a gift. I taught math all those years, but when I see my old students now, they don’t bring up any of our math lessons, they recall those special gatherings with music.”

She said it is an element that unites us.

A week after her surgery, Judy was well enough to be released from the hospital. Six weeks later her doctor released her to normal activities.

“After I was out of the hospital, I remember telling Fr. Leroy, ‘I know you need an organist, so….’,” she said. Before the conversation was over, he handed her a key to the church. Late that summer she played her first 10:30 a.m. Mass.

“Here I am all these years later,” she said with a smile. “I receive so many positive comments after Mass. It doesn’t matter if I think I play well or not. I don’t play fancy, but St. Jude parish likes what I play and I’m thankful. For me it’s not a labor of love, it’s God’s plan. I need to be here.”

Judy is not the only member of the family that invests her time and talent for the church. Pat has served as usher, youth faith formation teacher (formerly CCD), and parish councilman. When her sons were at home, they were altar servers through high school and ushers afterwards. 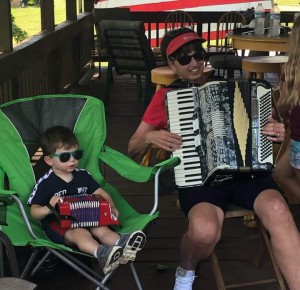 Jack and his wife Tammy are members of St. Jude along with their children Trick (short for Patrick) and Rayna. Trick has stolen the hearts of many in the pews, as he not only helps his father and grandfather usher, but also has shared his musical talents, playing Jingle Bells for the congregation on his mini piano after Mass during the Christmas season.

Danny and his wife Kathleen attend St. Michael Parish, Wheeling, with their one-year-old daughter Charlotte. During the holidays, the extended Doyle family fill up two or three long pews to celebrate the holy day and sing-along with the congregation and of course their beautiful music minister.