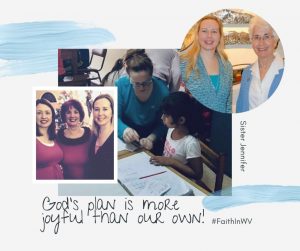 Sometimes the plan God has for you has been right in front of you your whole life, but He doesn’t take your blindfold off until you’re ready.
That is true for Sister Jennifer Berridge, a second-year novice with the Congregation of Saint Joseph. Her sapphire blue eyes light up as she shares the story of her journey to becoming a religious sister.
Berridge is a graduate of Kent State University with a bachelor’s degree in human services. She knew she wanted a career to help people, but a few years into her career she knew she wanted more. So, she enrolled into a medical technician program and became a registered vascular technician.
For 13 years she worked at Aultman Hospital in Canton, Ohio. She felt like she was making a difference and was connecting with her patients.
“I was able to answer questions, calm their fears, and reassure them, so I was using my social work skills,” she said. “I felt like I was on the right path. This is what I’m supposed to be doing, but God obviously had a different plan.”
After Mass one morning Berridge was stopped and greeted by a “sweet lady who I had often seen at church, talked to after Mass, but didn’t know very well.” 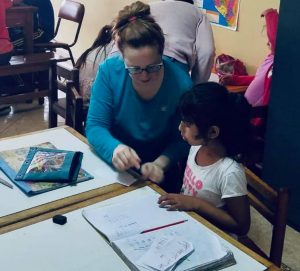 Sister Jennifer Berridge works with a young child at an after school program in Peru, as part of the Congregation of St. Joseph’s third world missionary work.

She was taken aback by the woman’s question, and at that moment didn’t realize it, but her life was about to significantly change.
“She simply asked if I’d ever thought about religious life,” Berridge recalled. “I was 38-years-old at the time. Religious life had never even entered my mind. I honestly thought to myself ‘Is this still a thing?’ All the nuns I knew were much older, and most were retired.”
The “sweet lady” was Sister Dorothy Ann Blatnica of the Sisters of Charity out of Cincinnati. Berridge agreed to continue the conversation over lunch.
“Afterward, when I got in my car and headed down the road, I immediately had the most peaceful thought – I know she’s right. A place inside me knew that I was meant to do this,” Berridge said.
She went home and told her mother Kathy and sister Becky about the lunch, the talk, and her “revelation” that she felt that she should consider religious life.
“They both looked at me and without hesitation agreed. They too, could see that for me,” she said throwing her hands up, as if she were reliving an “ah-ha” moment.
Berridge grew up in Cleveland with her younger sister Becky, along with their parents, John and Kathy. Jennifer and her family were members of Church of the Resurrection in Solon, Ohio. The pastor at Resurrection was forward thinking in the 1970s and created a pastoral team, involving the religious sisters from the Congregation of Saint Joseph. This team became the Berridge’s extended family.
When Jennifer was around age four, her father unexpectedly passed away, leaving Kathy, who was in her 20s at the time, to raise the girls on her own.
“The sisters helped my mom a lot,” she said. “I was so young I can just remember them as a constant in our lives. They encouraged my mom to take a job in our parish office. It was ideal.” 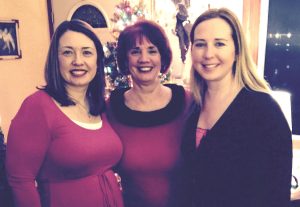 Sister Jennifer Berridge, pictured at right, was surprised when her sister Becky Berridge Dempsey(at left) and mom Kathy (center), didn’t hesitate with their approval of her becoming a religious sister.

While several religious sisters from the congregation were active on the pastoral team, and so important to the Berridges, it was Sr. Pat Adams, who Jennifer fondly recalls being so compassionate. “Once I began discerning religious life, I knew I needed to talk to the Sisters of Saint Joseph who were so important to my church and my family, so I spoke to Sr. Pat,” she said. It was the Fall of 2014, the two met at Rivers’ Edge, the location of the Congregation of Saint Joseph in Cleveland.
“From the moment I walked into Rivers’ Edge I felt at home,” she said. “Sr. Pat suggested I attend a retreat coming up there to which I instantly agreed to. After staying there for the weekend my feelings were strengthened even more. I knew right away this was for me. I asked, how do I apply?”
In December of 2015, she officially applied to be a candidate for religious life with the Congregation of Saint Joseph. Sister Judith Minear served as her vocational director in Cleveland during this time of discernment and application. Minear is from Parkersburg, WV and entered the Sisters of Saint Joseph through the Wheeling congregation. She took Jennifer to visit Wheeling’s congregation at Mount Saint Joseph as part of her getting to know the congregation. Jennifer said that she instantly fell in love with Wheeling and wondered if she could ever live in Wheeling.
Berridge was formally accepted as a Candidate, and an official ceremony was held in Cleveland on Jan. 23, 2016.
“So many people came to my Candidate ceremony in Cleveland and filled the chapel,” she said. “It was a joyful day!”
Berridge was involved in the youth ministry at the Church of the Resurrection.
“I was still in contact with the high school and college aged girls through my parish,” she said.
“I was so excited when they wanted to come to my ceremony. It was so special.”
One week later, Berridge moved to Mount Saint Joseph in Wheeling.
“I was embraced by all the sisters here in Wheeling,” she said. “Everyone was so warm and welcoming to me.”
Sr. Kathleen Durkin in Wheeling agreed to serve as her Candidate Director. 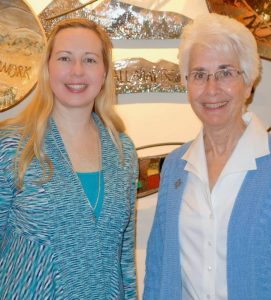 Once in Wheeling, Sister Jennifer Berridge at left, was guided by Candidate Director Sister Kathleen Durkin of the Congregation of St. Joseph at Mount St. Joseph.

After being a Candidate for two and a half years, she entered what is called the Novitiate Stage of formation, which is typically a two-year period to continue discernment and experience a concentrated program on prayer, study, reflection, and ministry. Sr. Christine Riley serves as her Novice Mentor. Berridge currently lives on 15th Street in Wheeling in the original Wheeling Hospital house with Sr. Christine Riley and Sr. Ellen Poche from New Orleans.
There are seven communities that make up the Congregation of Saint Joseph. They are in Cleveland and Wheeling, as well as Kansas, Illinois, Michigan, Indiana, Louisiana, and Minnesota. As the Sisters of Saint Joseph, these women “respond to the unmet and critical needs of our contemporary society and the world.”
Berridge recently spent a month in Peru working with children in an after-school program as part of the congregation’s third world missionary work.
“I only speak English and at the time, I could only count to ten in Spanish, but I learned that love transcends all, and these children knew we were there to love and care for them,” she said. “It was an amazing experience.”
Berridge is currently in the midst of her discernment and application for first vows this Summer.
As she prepares for initial profession, she will continue to visit the congregations of Sisters of Saint Joseph. She is also taking an online course- Survey of Systematic Theology- through Catholic Theological University in Chicago.
Berridge’s current ministry in Wheeling is volunteering in Pastoral Care at Serenity Hills Life Center, an addiction and recovery facility for women.
She acknowledges that this ministry is a clear affirmation that God had a plan for her to be in Wheeling all along. Her degree in human services and the compassion she has shown working with patients at Aultman Hospital enables her to serve and to be a blessing to the women in treatment at Serenity Hills, who desperately need support and encouragement.
“I get to listen to these ladies, talk to them about their hopes and dreams, about God, about how they pray, or about whatever is helpful for them,” she said. “They have had so much chaos and drama in their lives. My prayer is that I can be a stabilizing force for them. I hope that I provide a safe space for the women to just be themselves and talk about whatever is in their hearts. And I always remind them how much God loves them, and so do I.”
Berridge often gives them rosaries and a guiding prayer card.
“Usually they ask me to pray with them,” she said. “The beautiful chapel there has become my office per say. I love it. The feeling I get when they say, ‘Pray with me. Just pray with me,’ is so great.”
She feels humbled and honored to share this journey with the women in her ministry. She said that path toward healing and the path towards what is your purpose doesn’t have to be difficult, and can be simple when you open your heart to God.
For Berridge, becoming a religious sister is allowing her to be “something greater than myself.” She is eager to take her vows and knows “I truly feel God guided me along this whole journey.”
Professing her vows means taking the vows of poverty, chastity, and obedience.
The vow of poverty doesn’t mean you agree to be lowly or depressed in any way, she said. “It means giving of your time, yourself, and resources for the life of the world, as we challenge ourselves to live ever more simply.”
The vow of obedience isn’t being talked down to or ordered around by superiors, “it is deep listening to the voice of God. It is personal and communal discernment. It is about listening to my peers, to other sisters, and asking the question where the Spirit is leading us all at this time. It is being vulnerable, knowing I need to reflect and pray about what God is truly calling me to do.”
The vow of chastity “means I belong to God and I agree to give and receive love – the healthy genuine love – of many. All of the vows free us to love others well.”
Berridge is obviously joyful as she talks about her vocation, but clarifies there are times that are more challenging than others.
There are days of challenges and questions, “but these are the days that have made me stronger and deepened my commitment,” she said. “I’m so ready!”
To learn more about becoming a religious sister contact the Sisters of St. Joseph at vocations@csjoseph.org. To support the congregation through your monetary gifts, mail them to Mount St. Joseph, 137 Mount St. Joseph Road, Wheeling, WV. 26003-1762.